tett you what the FTA has done... 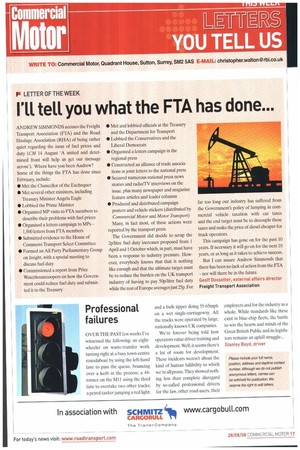 Page 17, 28th August 2008 — tett you what the FTA has done...
Close
Noticed an error?
If you've noticed an error in this article please click here to report it so we can fix it.
Keywords : Transport, Energy In The United Kingdom, Transport Economics, Road Haulage Association, Freight Transport Association, Hydrocarbon Oil Duty, Gasoline And Diesel Usage And Pricing, Business, Politics

ANDREW S1MMONDS accuses the Freight Transport Association (FTA) and the Road Haulage Association (RHA) of being rather quiet regarding the issue of fuel prices and duty (CM 14 August `A united and determined front will help us get our message across'). Where have you been Andrew? Some of the things the FTA has done since February, include: • Met the Chancellor of the Exchequer • Met several other ministers, including Treasury Minister Angela Eagle • Lobbied the Prime Minister • Organised MP visits to FTA members to describe their problems with fuel prices • Organised a letters campaign to MPs — 1,500 letters from FTA members • Submitted evidence to the House of Commons Transport Select Committee • Formed an All Party Parliamentary Group on freight, with a special meeting to discuss fuel duty • Commissioned a report from Price Waterhousecoopers on how the Government could reduce fuel duty and submitted it to the Treasury • Met and lobbied officials at the Treasury and the Department for Transport • Lobbied the Conservatives and the Liberal Democrats • Organised a letters campaign in the regional press • Constructed an alliance of trade associations in joint letters to the national press • Secured numerous national press news stories and radio/TV interviews on the issue, plus many newspaper and magazine feature articles and leader columns • Produced and distributed campaign posters and vehicle stickers (distributed by Commercial Motor and Motor Transport) Many, in fact most, of these actions were reported by the transport press.

The Government did decide to scrap the 2p/litre fuel duty increases proposed from 1 April and 1 October which, in part, must have been a response to industry pressure. However, everybody knows that that is nothing like enough and that the ultimate target must be to reduce the burden on the UK transport industry of having to pay 50p/litre fuel duty while the rest of Europe averages just 25p. For far too long our industry has suffered from the Government's policy of lumping in commercial vehicle taxation with car taxes and the end target must be to decouple these taxes and make the price of diesel cheaper for truck operators.

This campaign has gone on for the past 10 years. If necessary it will go on for the next 10 years, or as long as it takes to achieve success.

But 1 can assure Andrew Simmonds that there has been no lack of action from the FTA — nor will there be in the future.