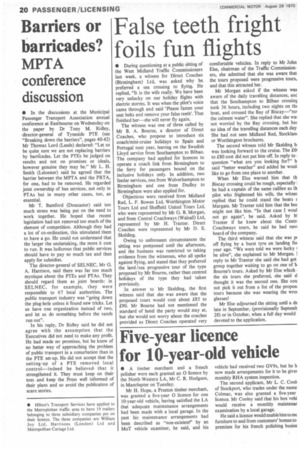 • During questioning at a public sitting of the West Midland Traffic Commissioners last week, a witness for Direct Coaches (Birmingham) Ltd, was asked why he preferred a sea crossing to flying. He replied, "It is the wife really. We have been very unlucky on our holiday flights with electric storms. It was when the pilot's voice came through and said 'Please fasten your seat belts and remove your false teeth'. That finished her—she will never fly again.

The witness was one of three called by Mr B. A. Bourne, a director of Direct Coaches, who propose to introduce six coach/mini-cruise holidays to Spain and Portugal next year, leaving on the Swedish Lloyd service from Southampton to Bilbao. The company had applied for licences to operate a coach link from Birmingham to the ferry for passengers bound on the inclusive holidays only. In addition, two feeder services, one from Wolverhampton to Birmingham and one from Dudley to Birmingham were also applied for.

Owing to unforeseen circumstances the sitting was postponed until the afternoon, and the business was restricted to taking evidence from the witnesses, who all spoke against flying, and stated that they preferred the land /sea progressive tour of the type proposed by Mr Bourne, rather than centred holidays of the type they had taken previously.

In answer to Mr Skelding, the first witness said that she was aware that the proposed tours would cost about £85 to £90. Mr Bourne had not mentioned the standard of hotel the party would stay at, but she would not worry about the coaches provided as Direct Coaches operated very comfortable vehicles. In reply to Mr John Else, chairman of the Traffic Commissioners, she admitted that she was aware that the tours proposed were progressive tours, and that this attracted her.

Mr Morgan asked if the witness was aware of the daily travelling distances, am that the Southampton to Bilbao crossini took 36 hours, including two nights on au boat, and crossed the Bay of Biscay—"no. the calmest water". She replied that she wa! not worried by the Bay crossing. but hac no idea of the travelling distances each day. She had not seen Midland Red. Stocklam or Worthington brochures.

The second witness told Mr Skelding h was looking forward to the cruise. The £61 to £80 cost did not put him off. In reply to question "what are you looking for?" h said "better weather" and added he woul like to go from one place to another.

When Mr Else warned him that th Biscay crossing could be rough, especially he had a captain of the same calibre as th pilot who frightened his wife, the witneE replied that he could stand the boats Margate. Mr Tranter told him that the bcx might not like him. "In that case I wool not go again", he said. Asked by N Tranter if he knew about the Centz Coachways tours, he said he had nevi heard of the company.

The third witness said that she was pi off flying by a burst tyre on landing foi year ago. "We were told we were lucky be alive", she explained to Mr Morgan. I reply to Mr Tranter she said she had got group together waiting to go on one of Bourne's tours. Asked by Mr Else which the six tours she preferred, she said sl thought it was the second one. She cou not pick it out from a list of the propos1 tours because she was wearing the wroi glasses!

Mr Else adjourned the sitting until a de late in September, (provisionally Septemb 28) or in October, when a full day would devoted to the application.