No Waiting in. 196. London Streets 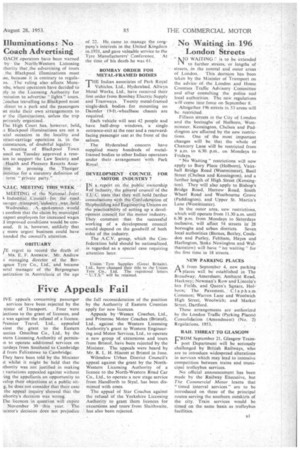 Page 35, 28th August 1953 — No Waiting in. 196. London Streets
Close
Noticed an error?
If you've noticed an error in this article please click here to report it so we can fix it.

"jO WAITING?' is to be extended '11 to further streets, or lengths of streets, in the central and outer areas of London. -This decision has been taken by the Minister of Transport on the advice of the .London and Home Counties Traffic Advisory Committee and after consulting the police and local authorities. The new regulations will come into force on.September 8.

Altogether 196 streets in 53-areas will be restricted.

'Fifteen streets in the City of London and the boroughs of Holborn, Westminster, Kensington, Chelsea and Paddington are affected by the new restrictions. One of the most important changes will be that the whole of Chancery Lane will be restricted from 9 a.m. to 6.30. p.m.. on Mondays to Fridays..

In the outer area, new restrictions, hich will operate from 11.30 a.m. until 6.30 p.m. from Mondays to Saturdays inclusive, will affect 54 streets in' 28 boroughs and urban districts. Seven local authorities (Barnes, Bexley, Coulsdon and Purley, Felt ham, Hayes and Harlington, Stoke Newington and Waltharnstow) will have "ho waiting" for the first time in 18 streets. •