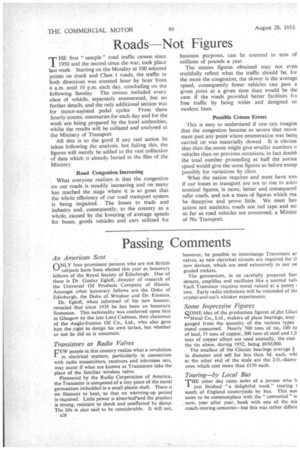 Page 30, 28th August 1953 — Roads Not Figures
Close
Noticed an error?
If you've noticed an error in this article please click here to report it so we can fix it.

THE first " sample " road traffic census since 1950 and the second since the war, took place last week. Starting on the Monday at 100 selected points on trunk and Class 1 roads, the traffic in both directions was counted hour by hour from 6 a.m. until 10 p.m. each day, concluding on the following Sunday. The census included every class of vehicle, separately enumerated, but no further details, and the only additional section was for motor-assisted pedal cycles From these hourly counts, summaries for each day and for the week are being prepared by the local authorities, whilst the results will be collated and analysed at the Ministry of Transport All this is to the good if any real action be taken following the analysis, but failing this, the figures will merely be added to the vast collection of data which is already buried in the files of the Ministry Road Congestion Increasing What everyone realizes is that the congestion on our roads is steadily increasing and on many has reached the stage where it is so great that the whole efficiency of our road transport system is being impaired. The losses to trade and industry and, consequently, to the country as a whole, Caused by the lowering of average speeds for buses, goods vehicles and cars utilized for business purposes, can be counted in tens of millions of pounds a year.

The census figures obtained may not even truthfully reflect what the traffic should be, for the more the congestion, the slower is the average speed, consequently fewer vehicles can pass a given point at a given time than would be the case if the roads provided better facilities for free traffic by being wider and designed on modern lines.

Possible Census Errors This is easy to understand if one can imagine that the congestion became so severe that move. ment past any point where enumeration was beirq carried on was materially slowed It is (AM= that then the count might give smaller numbers o vehicles than on previous occasions, in fact doubl4 the total number proceeding at half the norma speed would give the same figures as before excep possibly for variations by class.

What the nation requires and must have S001 if our losses in transport are not to rise to astro nomical figures, is more, better and consequentl safer roads, and not a mass of figures which ma be deceptive and prove little. We must hay action not statistics, roads not red tape and no, so far as road vehicles are concerned, a Ministr of No Transport.

Organisations: Ministry of Transport All
comments powered by Disqus