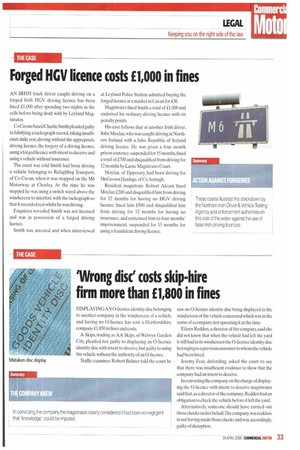 AN IRISH truck driver caught driving on a forged Irish HGV driving licence has been lined £1,000 after spending two nights in the cells before being dealt with by Leyland Magistrates.

Co Cavan-based Charlie Smith pleaded guilty to falsifying a tachograph record, taking insufficient daily rest, driving without the appropriate driving licence, the forgery of a driving licence, using a forged licence with intent to deceive and using a vehicle without insurance.

The court was told Smith had been driving a vehicle belonging to Relaghbeg Transport, of Co Cavan, when it was stopped on the M6 Motorway at Chorley. At the time he was stopped he was using a switch wired above the windscreen to interfere with the tachograph so that it recorded rest whilst he was driving.

Enquiries revealed Smith was not licensed and was in possession of a forged driving licence.

Smith was arrested and when interviewed at Leyland Police Station admitted buying the forged licence at a market in Cavan for £30.

Magistrates fined Smith a total of £1,000 and endorsed his ordinary driving licence with six penalty points.

His case follows that of another Irish driver, John Moylan, who was caught driving in Northern Ireland with a false Republic of Ireland driving licence. He was given a four month prison sentence,suspended for 15 months, fined a total of 000 and disqualified from driving for 12 months by Larne Magistrates Court.

Moylan, of Tipperary, had been driving for McGeown Haulage, of Co Armagh.