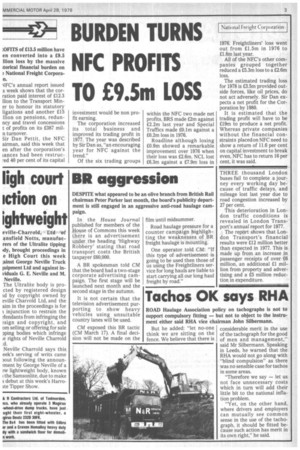 Page 5, 28th April 1978 — BR aggression
Close
Noticed an error?
If you've noticed an error in this article please click here to report it so we can fix it.
Keywords : Haulage, Rail Transport

DESPITE what appeared to be an olive branch from British Rail chairman Peter Parker last month, the board's publicity department is still engaged in an aggressive anti-road haulage campaign.

In the House Journal published for members of the House of Commons this week there is an advertisement under the heading 'Highway Robbery' stating that road transport costs the British taxpayer £60,000_ A BR spokesman told CM that the board had a two-stage corporate advertising campaign. The first stage will be launched next month and the second stage in the autumn.

It is not certain that the television advertisement purporting to show heavy vehicles using unsuitable country lanes will be used.

CM exposed this BR tactic (CM March 17). A final decision will not be made on the film until midsummer.

Road haulage pressure for a counter campaign highlighting the weaknesses of BR freight haulage is mounting.

One operator told CM: "If this type of advertisement is going to be used then those of us using the Freightliners service for long hauls are liable to start carrying all our long haul freight by road."