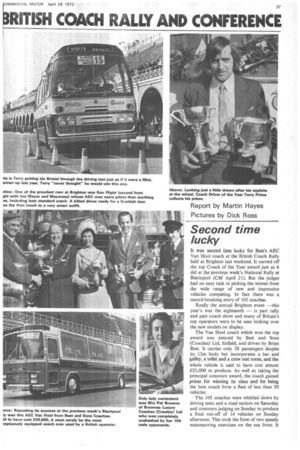 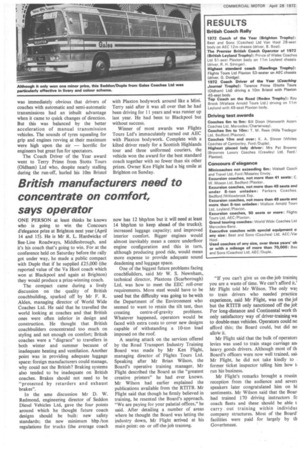 It was second time lucky for Best's AEC Van Hool coach at the British Coach Rally held at Brighton last weekend. It carried off the top Coach of the Year award just as it did at the previous week's National Rally at Blackpool (CM April 21). But the judges had no easy task in picking the winner from the wide range of new and impressive vehicles competing. In fact there was a record-breaking entry of 105 coaches.

Really the annual Brighton event —this year's was the eighteenth — is part rally and part coach show and many of Britain's top operators were to be seen looking over the new models on display.

The Van Hool coach which won the top award was entered by Best and Sons (Coaches) Ltd, Enfield, and driven by Brian Best. It carries only 28 passengers despite its 12m body but incorporates a bar and galley, a toilet and a crew rest room, and the whole vehicle is said to have cost almost E25,000 to produce. As well as taking the principal concours award, the coach gained prizes for winning its class and for being the best coach from a fleet of less than 50 vehicles.

The 105 coaches were whittled down by driving tests and a road section on Saturday and concours judging on Sunday to produce a final run-off of 14 vehicles on Sunday afternoon. This took the form of two speedy manoeuvring exercises on the sea front. It was immediately obvious that drivers of coaches with automatic and semi-automatic transmissions had an inbuilt advantage when it came to quick changes of direction. But this was balanced by the better acceleration of manual transmission vehicles. The sounds of tyres squealing for grip and engines revving at their maximum were high upon the air — horrific for engineers but great fun for spectators.

The Coach Driver of the Year award went to Terry Prime from Stotts Tours (Oldham) Ltd who, despite nearly stalling during the run-off, hurled his 10m Bristol with Plaxton bodywork around like a Mini. Terry said after it was all over that he had been driving for 11 years and was runner up last year. He had been to Blackpool but without success.

Winner of most awards was Flights Tours Ltd's immaculately turned out AEC with Plaxton bodywork. Complete with a kilted driver ready for a Scottish Highlands tour and three uniformed couriers, the vehicle won the award for the best standard coach together with no fewer than six other prizes. Owner Ken Flight had a big smile at Brighton on Sunday.