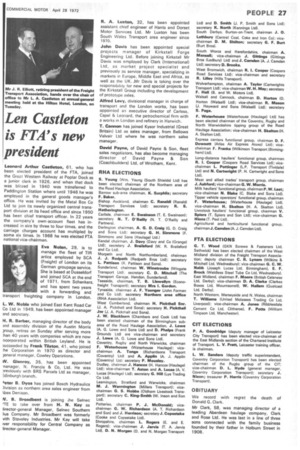 Page 29, 28th April 1972 — Len Castleton is FTA' s new president
Close
Noticed an error?
If you've noticed an error in this article please click here to report it so we can fix it.
Keywords : Business / Finance

Leonard Arthur Castleton, 61, who has been elected president of the FTA, joined the Great Western Railway at Poplar Dock as a junior clerk in 1926, and when that dock was blitzed in 1940 was transferred to Paddington Station where until 1946 he was employed in the general goods manager's office. He was invited by the Metal Box Co Ltd to join its newly organized central transport division at its head office and since 1950 has been chief transport officer. In 22 years the company's own-account fleet has increased in size by three to four times, and the carriage charges account has multipled by some six times. In 1968 he was elected PTA national vice-chairman.

Eva Nolan, 29, is to manage the fleet of TIR artics employed by SCA (Freight) of London on its German groupage service. She is based at Dusseldorf and joined SCA at the end of 1971, from Schenkers, and has spent two years with a forwarding and transport freighting company in London.

H. R. Barber, managing director of the body and assembly division of the Austin Morris group, retires on Sunday after serving more :han 40 years with companies which are now ncorporated within British Leyland. He is 3ucceeded by Frank Tilston, 41, who joined :he Corporation in 1970 as director and general manager, Cowley Operations.

R. A. Luxton, 32, has been appointed assistant. chief engineer of Hants and Dorset Motor Services Ltd. Mr Luxton has been South Wales Transport area engineer since 1970.

John Davis has been appointed special projects manager of Kirkstall Forge Engineering Ltd. Before joining Kirkstall Mr Davis was employed by Clark (International) Ltd, as market project specialist and previously as service manager, specializing in markets in Europe, Middle East and Africa, as well as the UK. Mr Davis is taking over the responsibili ty for new and special projects for the Kirkstall Group including the development of prototype axles.

Alfred Levy, divisional manager in charge of transport and the London works, has been appointed an executive director of Carless, Cape! & Leonard, the petrochemical firm with a works in London and refinery in Harwich.

S. Young (Wm. Young (South Shields) Ltd) has been elected chairman of the Northern area of the Road Haulage Association.

P. A. Goodridge (deputy manager of Leicester City Transport) has been elected vice-chairman of the East Midlands section of the Chartered Institute of Transport. L. V. Pratt, Leicester training officer, is chairman.

We record with regret the death of Donald G. Clark.

Mr Clark, 58, was managing director of a leading Aberdeen haulage company. Clark and Rose Ltd. He was last in a line of three sons connected with the family business founded by their father in Holburn Street in 1908.