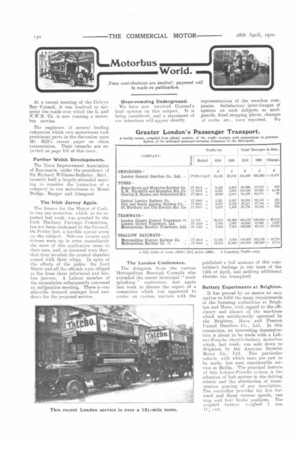 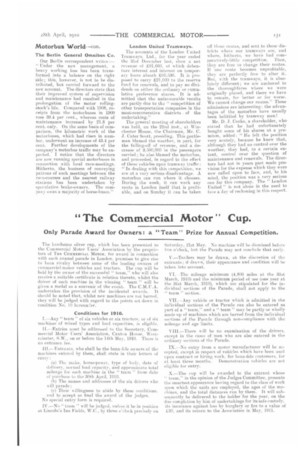 At a recent meeting of the Colwyn Bay Council, it was resolved to tarspray the roads over which the L. and N.W.R. Co. is now running a motorbus service.

The engineers of several leading companies which own motorbuses took prominent parts in the discussion upon Mr. Hill's recent paper on chain transmission. Their remarks are reported on page 161 of this issue.

The Town Improvement Association of Beaumaris, under the presidency of Sir Richard Williams-Bulkeley, Bart., recently held a largely-attended meeting to consider the formation of a company to run moterbuses to Menai Bridge, Bangor and Llangoed.

The licence for the Mayor of Cork. to run one motorbus. which, as we reported last week, was granted by the Cork Hackney Carriage Committee, has not been confirmed by the Council. On Friday last., a terrible uproar arose on the subject. Side-car owners and drivers were tip in arms immediately the news of this application came to rheir ears, and, so incensed were they, that they invaded the council chamber armed with their whips. In spite of the efforts of the police, the Lord Mayor and all the officials were obliged to flee from these infuriated and lawless jarveys. A Labour member of the corporation subsequently convened an indignation meeting. There is considerable demand amongst local residents for the proposed service,. Overcrowding Underground.

We have now received Counsel's final opinion on this subject. It is being considered. and a statement of our intentions will appear shortly.

The London Conference, The delegates from the various Metropolitan Borough Councils who attended the recent municipal " mudsplashing " conference, met again last week to discuss the report of a committee which was appointed to confer on various matters with the representatives of the omnibus companies. Satisfactory interchanges of opinion on such subjects as mudguards, fixed stopping places, changes of route, etc.. were reported. We published a full account of this committee's findings in our issue of the 14th of April, and nothing additional thereto has transpired.

It has proved by no means an easy matter to fulfil the many requirements of the licensing authorities at Brighton and Hove, with regard to the efficiency and silence of the machines which are satisfactorily operated by the Brighton, Hove and Preston United Omnibus Co., Ltd. In this connection, an interesting demonstration is about to be made with a Lohner-Porsche electric-battery motorbus which, last week, was sent down to Brighton by the Austrian Daimler Motor Co., Ltd. This particular vehicle, with which tests are now to be made, has seen considerable service in Berlin. The principal feature of this Lohner-Porsche system is the adoption of hub motors in the driving wheels and the elimination of transmission gearing of any description. The. controller provides for five forward and three reverse speeds, one stop and four brake positions. The original battery weighed I ton 11,', cwt. The Berlin General Omnibus Co.

Our Berlin correspondent writes Under the new management, a heavy working loss has been transformed into a balance on the right side; this, however, is not to be distributed, but carried forward to the new account. The directors state that their improved system of supervision and maintenance had resulted in the prolongation of the motor rollingstock's life. Compared with 1908, receipts from the motorbuses in 1909 rose 39.4 per rent, whereas costs of maintenance increased by 21.8 per cent. only. On the same basis of comparison, the kilometric work of the motorbuses, which had risen in number, underwent an increase of 43,4 per cent. Further developments of the company's motorbus traffic may be expeeted. I notice that the directors are now running special motorbuses in connection with local race-meetings. Hitherto, the business of conveying patrons of such meetings between the race-courses and the nearest railway stations has been undertaken by speculative brake-owners. The company owns a majority of horse-hoses." London United Tramways.

The amounts of the London United Tramways, Ltd., fur the year ended the 31st December last, shown net revenue of 1:91,660, of which debenture interest and interest on temporary loans absorb £01036. it is proposed to carry £21,000 to the reserve fund for renewals, and to pay no dividendson either the ordinary or cumulative preference shares. It is admitted that the unfavourable results are partly due to the " competition of other transportation companies in the most-remunerative districts • of the undertaking."

The general meeting of shareholders was held, on the 22nd inst., at Winchester House, the Chairman, Mr. C. .I. Cater Scott, presiding_ This gentleman blamed the weather, in part, for the falling-off of revenue, and a deerease of 3,500,000 in the passengers carried ; he also blamed the motorbus, and proceeded, in regard to the effect of those vehicles upon tramway traffic: " In cleating with this competition, we are at a very serious disadvantage. A motorbus can run where it chooses. During the week, it can work any route in London itself that is profitable, and on Sunday it can be taken off those routes, and sent to those districts where our tramways are, and where, hitherto, we have had com paratively-little competition. Then, they are free to change their routes. If one route becomes unprofitable, they are perfectly free to alter it. But, with the tramways, it is absolutely different; we are anchored to the thoroughfares where we were originally placed, and there we have to remain, for better or for worse. We cannot change our routes." These admissions are interesting: the advantages of tho motorbus have usually been belittled by tramway men!

Mr. D. J, Cooke, a shareholder, who stated that he had unfortunately bought some of his shares at a premium, added: " He feltthe position very acutely, because he knew that, although they had no control over the weather, they had, to a certain extent, control over the question of maintenance and renewals. The directors had not in years past made provision for the expense which they were now called upon to face, and, to his mind, the position was a very serious one for this company. The "London United " is not alone in the need to face a day of reckoning in this respect,