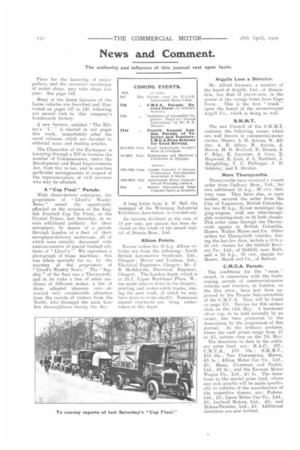 Page 10, 28th April 1910 — News and Comment.
Close
Noticed an error?
If you've noticed an error in this article please click here to report it so we can fix it.
Keywords : Leyland Motors, Albion Motors, Thornycroft, Aster, Argyll

The authority and influence of this journal rest upon facts.

Plans for the financing of motor pedlar, and the extensive circulation of motor shops, may take shape this year. See page 143.

Many of the latest features of the Lacre vehicles are described and illustrated on pages 147 to 149, following our second visit to this company's Letchworth factory.

A new feature, entitled " The Edi tor's ` " is started in our pages this week, immediately after the usual columns which are devoted to editorial notes and leading articles.

The Chancellor of the Exchequer is hurrying through a Bill to increase the number of Commissioners, under the Development and Road Improvements Act, from five to ten, and to sanction particular arrangements in respect of the superannuation of civil servants who may be affected.

With characteristic enterprise, the proprietors of '' Lloyd's Weekly News" seized the opportunity afforded on the occasion of the English Football Cup Tie Final, at the Crystal Palace, last Saturday, to secure additional publicity for their newspaper, by means of a parade through London of a fleet of their newspaper-delivery motorvans, all of which were suitably decorated with announcements of special football editions of "Lloyd's." We reproduce a photograph of these machines; this was taken specially for us, by the courtesy of the proprietors of " Lloyd's Weekly News." The " flagship " of the fleet was a Thornycroft, • and in its wake a line of other machines of different makesa few of them adapted pleasure cars-attracted very considerable attention from the crowds of visitors from the North, who thronged the main London thoroughfares during the day. Recent orders for 16 h.p. Albion vehicles are from the following: North British Locomotive Syndicate, Ltd., Glasgow ; Mayor and Coulson, Ltd., Electrical Engineers. Glasgow ; Mr. J. B. Meiklejohn, Electrical Engineer, Glasgow. The London depot, which is at 21-2, Upper Ita.thbone Place, W., has made sales to firms in the drapery, printing and motor-spirit trades, during the past week, of which we may have more to write shortly. Numerous annual overhauls are being undertaken at this depOt. Argylls Lose a Director.

Mr. Alfred Gaussen, a member of tho board of Argylls, Ltd., of Alexandria, has died of pneuniania, in the course of the voyage home from Cape Town. This is the first " break " upon the board of the reconstructed Argyll Co., which is doing so well.

More Thornycroits. Thornycrofts have, received a repeat order from Cadbury Bros].td, for two additional 16 30 cwt. delivery vans. They have also, in open tender, secured the order from the City of N'ancouver, British Columbia, for two 30 h.p., 3.-ton municipal tipping-wagons, with one interchangeable watering-body to fit both chassis. This order came through the Thornycroft agents in British Columbia, Messrs. Walter Hayes and Co. Other orders for Thornycroft vehicles, during the last few days, include a 16 h.p. 50 cwt. chassis for the Oakhill Brewery Co., Ltd., of Oakhill, near Bath, and a 21 h.p., 50 cwt. chassis for Messrs. Marsh and Co., of Belfast.

The conditions for the " team " award, in connection with the. forth. coming parade of commercial-motor vehicles and tractors, in London, on the 21st prox., have now been approved by the Parade Sub-committee of the C.M.U.A. They will be found on page 151. Entries for this section close on the 14th May A handsome silver cup, to be held annually by an owner, has been presented to the Association by the proprietors of this journal. In the ordinary sections, where the cash prizes range from .C1 to £5, entries close on the 7th May.