John Wells to offer resignation to HA this week? 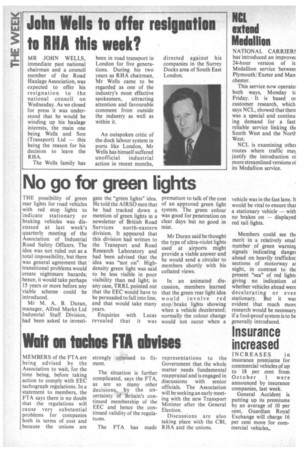 Page 20, 27th September 1974 — John Wells to offer resignation to HA this week?
Close
Noticed an error?
If you've noticed an error in this article please click here to report it so we can fix it.
Keywords : Road Haulage Association, Wells, Haulage, Surrey

MR JOHN WELLS, immediate past national chairman and a council member of the Road Haulage Association, was expected to offer his resignation to the national council on Wednesday. As we closed for press it was understood that he would be winding up his haulage interests, the main one being Wells and Son (Transport) Ltd — this being the reason for his decision to leave the RHA.

The Wells family has been in road transport in London for five generations. During his two years as RHA chairman, Mr Wells came to be regarded as one of the industry's most effective spokesmen, attracting attention and favourable comment from outside the industry as well as within it. directed against his companies in the Surrey Docks area of South East London.