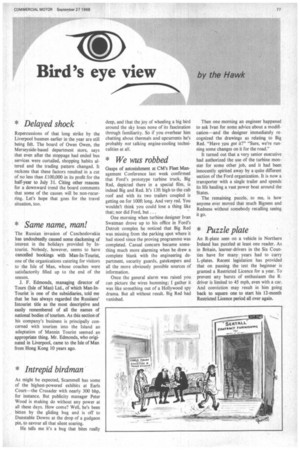 Page 79, 27th September 1968 — * Same name, man!
Close
Noticed an error?
If you've noticed an error in this article please click here to report it so we can fix it.
Keywords : Intourist, Kgb, Isle Of Man, Manx Electric Railway

The Russian invasion of Czechoslovakia has undoubtedly caused some slackening of interest in the holidays provided by Intourist. Nobody, however, seems to have cancelled bookings with Man-In-Tourist, one of the organizations catering for visitors to the Isle of Man, whose coaches were satisfactorily filled up to the end of the season.

J. F. Edmonds, managing director of Tours (Isle of Man) Ltd., of which Man-InTourist is one of the subsidiaries, told me that he has always regarded the Russians' Intourist title as the most descriptive and easily remembered of all the names of national bodies of tourism. As this section of his company's business is principally concerned with tourism into the Island an adaptation of Mannin Tourist seemed an appropriate thing. Mr. Edmonds, who originated in Liverpool, came to the Isle of Man from Hong Kong 10 years ago.