Bristol RE Series 3 is announced 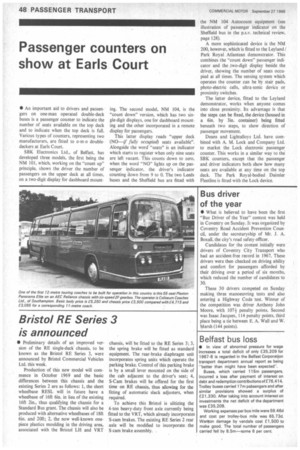 Page 50, 27th September 1968 — Bristol RE Series 3 is announced
Close
Noticed an error?
If you've noticed an error in this article please click here to report it so we can fix it.

• Preliminary details of an improved version of the RE single-deck. chassis, to be known as the Bristol RE Series 3, were announced by Bristol Commercial Vehicles Ltd. this week.

Production of this new model will commence in October 1969 and the basic differences between this chassis and the existing Series 2 are as follows: 1, the short wheelbase RESL will in future have a wheelbase of 16ft 6in. in lieu of the existing 16ft 2in., thus qualifying the chassis for a Standard Bus grant. The chassis will also be produced with alternative wheelbases of 18ft 6in. and 20ft; 2, the now well-known onepiece plastics moulding in the driving area, associated with the Bristol LH and VRT

chassis, will be fitted to the RE Series 3; 3, the spring brake will be fitted as standard equipment. The rear-brake diaphragm unit incorporates spring units which operate the parking brake. Control of this parking brake is by a small lever mounted on the side of the cab adjacent to the driver's seat; 4, S-Cain brakes will be offered for the first time on RE chassis, thus allowing for the fitting of automatic slack adjusters, when required.

To achieve this Bristol is ulitizing the 6-ton heavy-duty front axle currently being fitted to the VRT, which already incorporates S-cam brakes. The existing RE Series 2 rear axle will be modified to incorporate the S-cam brake assembly.