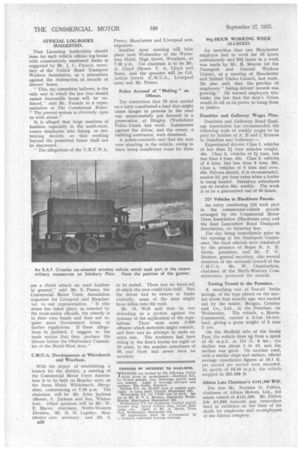 An assertion that one Manchester employee had to work for 16 hours continuously and 941 hours in a week was made by Mr. R. Moores (of the Transport and General Workers Union), at a meeting of Manchester and Salford Trades Council, last week. He also said that the practice of employers " faking drivers' records was growing." He warned employers who broke the law that the men's Union would do all in its power to bring them to justice.

The day being immediately prior to the opening of the Southport Conference, the local officials were reinforced by the presence of Major R. A. B. Smith, president, and Mr. F. G. Bristow, general secretary, also several members of the national council of the C.M.U.A. Mr. W. Chamberlain, chairman of the North-Western Commissioners, presented the awards.

Testing Tenoid in the Pennines.

A searching test of Tenoid brake facings, of the type placed on the market about four months ago, was carried out by the maker, Morgan, Crossley and Co., Ltd., in the Pennines, on Wednesday. The vehicle, a MorrisCommercial, carried a 2-ton 14-cwt. load, giving a gross weight of 5 tons 2 cwt.

The late Mr. Norman 0. Fulton, chairman of Albion Motors, Ltd., left estate valued at £141,390. Mr. Fulton left £1,00 towards any benevolent fund in existence at the time of his death for employees and ex-employees of the Albion company.