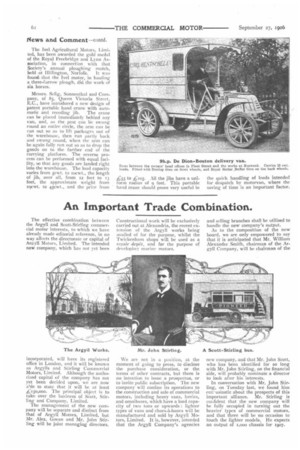 Page 14, 27th September 1906 — An Important Trade Combination.
Close
Noticed an error?
If you've noticed an error in this article please click here to report it so we can fix it.
Keywords : Stirling, Argyll, Business / Finance

The effective combination between the Argyll and Scott-Stirling commercial motor interests, to which we have already made editorial reference, in no way affects the directorate or capital of Argyll Motors, Limited. The intended new company, which has not yet been

incorporated, will have its registered office in London, and it will be known as Argyils and Stirling Commercial Motors, Limited. Although the authorised -capital of the company has not yet been decided upon, we are now able to state that it will be at least .4-0,5o,000. The principal object is to take over the business of Scott, Stirling and Company, Limited.

The management of the new company will be separate and distinct from that of Argyll Motors, Limited, but Mr. Alex. Govan and Mr. John Stirling will be joint managing directors. Constructional work will be exclusively carried out at Alexandria, the recent extension of the Argyll works being availed of for the purpose, whilst the Twickenham shops will be used as a repair depot, and for the purpose of developing marine motors.

We are not in a position, at the moment of going to press, to disclose the purchase consideration, or the terms of other contracts, but there is no intention to issue a prospectus, or to invite public subscription. The new company will confine its operations to the construction and sale of commercial motors, including heavy vans, lorries, and omnibuses, which have a load capacity of two tons or upwards : lighter types of vans and chars-a-bancs will be manufactured and sold by Argyll Motors, Limited. It is, however, intended that the Argyll Company's agencies

and selling branches shall be utilised to handle the new company's output. As to the composition of the new board, we are only empowered to say that it is anticipated that Mr. William Alexander Smith, chairman of the Argyll Company, will be chairman of the new company, and that Mr. John Scott, who has been identified for so long with Mr. John Stirling, on the financial side, will probably nominate a director to look after his interests.

In conversation with Mr. John Stirling, on Tuesday last, we found him enti-usiastic about the prospects of this important alliance. Mr. Stirling is confident that the new company will he fully occupied in turning out the heavier types of commercial motors, and that there will be no occasion to touch the lighter models. He expects an outhut of 1,000 chassis for tgo7.