We need giants not dwarves 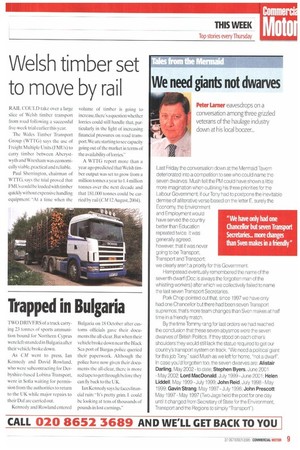 Page 9, 27th October 2005 — We need giants not dwarves
Close
Noticed an error?
If you've noticed an error in this article please click here to report it so we can fix it.
Keywords : Parliament Of The United Kingdom, Dungeons & Dragons, Politics Of The United Kingdom, Dwarf, Dwarves, John Prescott, Stephen Byers, Secretary Of State For The Environment, Transport And The Regions

Peter Lamer eavesdrops on a conversation among three grizzled veterans of the haulage industry down at his local boozer...

Last Friday the conversation down at the Mermaid Tavern deteriorated into a competition to see who could name the seven dwarves. Mush felt the PM could have shown a little more imagination when outlining his three priorities for the Labour Government; if our Tony had to postpone the inevitable demise of alliterative verse based on the letter E, surely the Economy, the Environment and Employment would have served the country better than Education repeated twice. It was generally agreed, however, that it was never going to be Transport, Transport and Transport; we clearly aren't a priority for this Government.

Hampstead eventually remembered the name of the seventh dwarf (Dec is always the forgotten man of the whistling workers) after which we collectively failed to name the last seven Transport Secretaries.

Pork Chop pointed out that, since 1997 we have only had one Chancellor but there had been seven Transport supremos; that's more team changes than Sven makes at half time in a friendly match.

By the time Tommy rang for last orders we had reached the conclusion that these seven abysmos were the seven dwarves of British Politics. If they stood on each other's shoulders they would still lack the statue required to get our country's transport system on track. "We need a political giant for this job Tony," said Mush as we left for home, "not a dwarf". In case you'd forgotten too, the seven dwarves are: Alistair Darling, May 2002to date; Stephen Byers, June 2001 May 2002; Lord MacDonald, July 1999 -June 2001; Helen Liddell, May 1999July 1999; John Reid, July 1998May 1999: Gavin Strang, May 1997 July 1998; John Prescott: May 1997 May 1997 (Two Jags held the post for one day until it changed from Secretary of State for the Environment, Transport and the Regions to simply "Transport").

"We have only had one Chancellor but seven Transport Secretaries... more changes than Sven makes in a friendly"