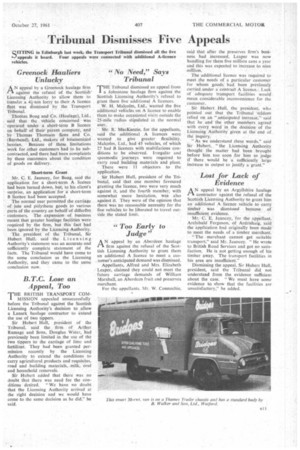 SITTING in Edinburgh last week, the Transport Tribunal dismissed all the five Oappeals it heard. Four appeals were connected with additional A-licence vehicles.

AN appeal by a Greenock haulage firm against the refusal of the Scottish Licensing Authority to allow them to transfer a 41-ton lorry to their A licence• fleet was dismissed by the Transport Tribunal.

Thomas Boag and Co. (Haulage),. Ltd., said that the vehicle concerned was operated under a short-term B licence on behalf of their parent company, and by • Thomas Thomson Sons and Co. (Barrhead), Ltd., makers of bitumenized hessian. Because of these limitations Work for other customers had to be subcontracted, and there had been complaints by these customers about the condition a goods on delivery.

The normal user permitted the carriage of jute and polythene goods to various parts of the country on behalf of different customers. The expansion of business meant that greater haulage facilities were required by the firm, but this fact had been ignored by the Licensing Authority.

THE BRITISH TRANSPORT COMMISSION appealed unsuccessfully before the Tribunal against the Scottish Licensing Authority's decision to allow a Lanark haulage contractor to extend the use of two tippers.

Sir Hubert Hull, president of the Tribunal, said the firm of Arthur Ramage and Sons, Douglas Water, had previously been limited in the use of the two tippers to the carriage of lime and fertilizer. They had been granted permission recently by the Licensing Authority to extend the conditions to carry agricultural products and requisites, road and -building materials, milk, coal and household removals.

THE Tribunal dismissed an appeal from a Johnstone haulage firm against the Scottish Licensing Authority's refusal to grant them five additional A licences.

W. H. Malcolm, Ltd., wanted the five additional vehicles on A licence to enable them to make occasional visits outside the 25-mile radius stipulated in the normal user..

Mr. R. MacKenzie, for the appellants, said the additional A licences were wanted to give greater flexibility. Malcolm, Ltd., had 45 vehicles, of which 27 had B licences with multifarious conditions to be observed. Irregular and spasmodic journeys were required to carry road building materials and plant.

There were 11 objectors to the application.

. Sir Hubert Hull, president of the Triburial, said that one member favoured granting the licence, two were very much against it. and the fourth member, with somewhat more hesitation, was also against it. They were of the opinion that there was no reasonable necessity for the five vehicles to be liberated to travel outside the stated limit.

Too Early to Judge

AN appeal by an Aberdeen haulage firm against the refusal of the Scottish Licensing Authority to grant them an additional A licence to meet a customer's anticipated demand was dismissed.

Appellants, Alfred and Mrs. Elizabeth Leaper, claimed they could not meet the future carriage demands of William Marshall, an Aberdeen fruit and preserves merchant.

For the appellants. Mr. W. Connochie, said that after the preserves firm's business had increased, Leaper was now handling for them five million cans a year and this was expected to increase to nine million.

The additional licence was required to meet the needs of a particular customer for whom goods had been previously carried under a contract A licence. Lack of adequate transport facilities would mean considerable inconvenience for the customer.

Sir Hubert Hull, the president, who pointed out that the Tribunal seldom relied on an "anticipated increase,"said that he and the other members agreed with every word in the decision of the Licensing Authority given at the end of the inquiry.

"As we understand these words." said Sir Hubert, "the Licensing Authority thought the matter had been brought before him_ too soon for him to judge if there would be a suffrciently large increase in output to justify a grant."

Lost for Lack of Evidence

Mr. C. E. Jauncey, for the appellant, Archibald Ferguson, of Ardrishaig, said the application had originally been made to meet the needs of a timber merchant.

"The merchant cannot get suitable transport," said Mr. Jauncey, He wrote to British Road Services and got no satisfaction. He is not getting enough of his timber away. The transport facilities in his area arc insufficient" Dismissing the appeal, Sir Hubert Hull, president, said the Tribunal did not understand from the evidence sufficient about the case. "We must have some evidence to show that the facilities arc unsatisfactory," he added.