On a Bus in London. 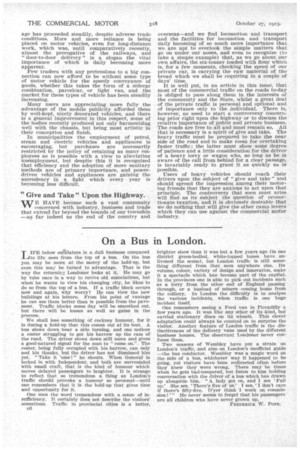 Page 2, 27th October 1925 — On a Bus in London.
Close
Noticed an error?
If you've noticed an error in this article please click here to report it so we can fix it.

LIFE below eAlaiors is a dull business compared to life seen from the top of a bus. On the bus you may be more at the mercy of the hold-up, but even this may be turned to advantage. That is the way the returnin:,Londoner looks at it. He may go by tube once in a way to revive old associations, but when he wants to view his changing city, he likes to do so from the top of a bus. If a traffic block occurs now and again, why worry? He can view the new buildings at his leisure. From his point of vantage he can see them better than is possible from the pavement. Traffic blocks some day will be smoothed out, but there will •be losses as well as gains in the process.

We shall lose something of cockney humour, for it is during a hold-up that this comes out at its best. A bus slows down Dear a side turning, and one notices a coster struggling to get his barrow up the cam of the road. The driver slows down still more and gives a good-natured signal for the man to "come on." The coster, being fully occupied with his barrow, can only nod his thanks, but the driver has not dismissed him yet. "Take it 'onle!" he shouts. When General is locked in with Independent and both are surrounded with small craft, that is the kind of humour which moves delayed passengers to laughter. It is strange to reflect that so tremendous a thing as London's traffic should provoke a humour so personal—until one remembers that it Is the hold-up that gives time and opportunity for it.

One uses the word tremendous with a sense of insufficiency. It certainly does not describe the visitors' sensations. Traffic in provincial cities is a better, De brighter show than it was but a few years ago (in one district green-bodied, white-topped buses have enlivened the scene), but London traffic is still something different from that seen anywhere else. Its volume, colour, variety of design and innovation, make it a spectacle which has become part of the capital. In the provinces one is able to pick out incidents such as a lorry from the other end of England passing through, or a busload of miners coming home from the colliery. In London the difficulty is to analyse the various incidents, when traffic is one huge incident itself.

One remembers seeing a Ford van in Piccadilly a few years ago. It was like any other of its -kind, but carried stationary discs on its wheels. This clever adaptation could always be counted on to surprise the visitor. Another feature of London traffic is the distinctiveness of the delivery vans used by the different business houses. The observant Londoner never confuses them.

Two seasons of Wembley have put a strain on London's traffic, and also on London's unofficial guide —the bus conductor. Wembley was a magic word on the side of a bus, whichever way it happened to be going, yet visitors have been redirected often before they knew they were wrong. There may be times when he gets bad-tempered, but listen to him holding conversation with the driver of a bus which has drawn up Alongside him. "A lady got on, and I ses 'Full

up.' She ses, 'There's five of us.' I ses, don't care if there's fifty-five. D'yer think I work on commission I ' " He never seems to forget that his passengers are all children who have never grown up.