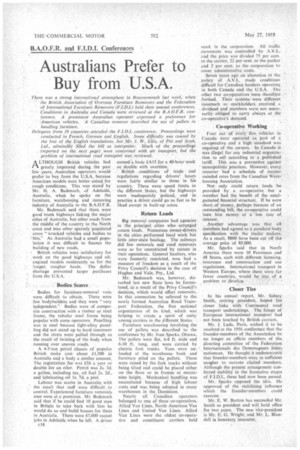 Australians Prefer to Buy from U.S.A

There was a strong internatintud atmosphere in Bournemouth last week, • when the British Association of 'Overseas Furniture Removers and the Federation of International Furniture Removers (F.1.D.I.) held their annual conferences. Conditions in AuStralia and Canada were reviewed at the B.A.O.F.R. conference_ A prominent Australian operator expressed a preference for -Ameriean vehicles. A Canadian remover described the use of pallets in

• Delegates from 19 countries attended the F.1.0.1. conference. Proceedings were conducted in French, German and English. Some difficulty was caused by the loss of the. English translations, hut .Mr. J. W. Ellis, of Pitt and Scott, Ltd., admirably filled the bill as interpreter.Much of the proceedings (reported on the next .page) were concerned with air transport, but the problem of international road transport was reviewed.

LTHOUGH British vehicles had f-t greatly improved during the past few years, Australian operators would prefer to buy from the U.S.A. because American models were better suited for rough conditions. This was stated by Mr. H. A. Badenoch, of Adelaide, Australia, when he spoke on the Furniture, warehousing and removing industry of Australia to the B.A.O.F.R.

Mr. Badenoch. said that there were good trunk highways linking the major cities of Australia, but other roads from the middle of the country to the North coast and into other sparsely populated areas "wracked vehicles and bodies to ' bits." As-Australia had a small population it was difficult to finance the building of new roads.

! British vehicles were satisfactory for work on the good highways and oilengined models moderately so for the loner, rougher hauls. The dollar shortage prevented larger purchases front the U.S.A.

Bodies for furniture-removal vans were difficult to obtain. There were few bodybuilders and they were "very independent." Bodies were of composite construction with a timber or steel frame, the tubular steel frame being popular with some operators. Panelling was in steel because light-alloy panelling did not stand up to hard treatment and the rivets were pulled through as the result of twisting of the body when running over uneven roads.

A 4-5-ton petrol chassis of popular British make cost about £1,500 in Australia and a body a similar amount. The registration fee was £56 a year or double for an oiler. Petrol was 2s. 3d. a gallon, including tax, oil fuel 2s, IL, and lubricating oil Is. 7d. a pint.

Labour was scarce in Australia with the result that staff were difficult . to control. Experienced furniture removals men were at a premium. Mr. Badertoch said that if he could find 10 good men in Britain to take back with him he would do so and build houses for them in Australia, There were 67,000 vacant jobs in Adelaide when he left. A driver cl 6 earned a basic £A15 for a 40-hour week or double with overtime.

British conditions of trade and regolations regarding drivers' hours were fairly similar to those in his country. There were speed limits in the different States, but the highways were inadequately 'policed, and in practice a driver could go as fast as he liked except in built-up areas.

Big removal companies had agencies in the principal cities who arranged return loads. Numerous owner-drivers in the cities performed local work but little inter-state haulage. The railways did few removals and road removers were so far unrestricted by statute in their operations. General hauliers, who were formerly restricted, now had a measure of freedom as a result of the Privy Council's decision in the case of Hughes and Vale, Pty„ Ltd.

Mr. Badenoch was, however, disturbed lest new State laws be formulated, -as a result of the Privy Council's decision, which would affect removers. In this connection he referred to the newly formed Australian Road Transport Federation, the first national organization of its kind, which was helping to create a spirit of unity among carriers in the different States.

Furniture warehousing involving the use of pallets was described to the conference by Mr. Ivan Sparks, Ottawa. The-pallets were fiat, 6-8 ft. wide and 6-10 ft. long, and were carried by electric fork trucks. Vans were unloaded at the warehouse bank and furniture piled on the pallets. These were raised by the fork trucks without being tilted and could be placed either on the floor or in frames at mezzanine height. Mechanical handling was necessitated because of high labour costs and was being adopted in many warehouses in the Dominion.

Nearly all Canadian operators belonged to one of three co-operatives, Allied Van Lines, North American Van Lines and United Van Lines. Allied Van Lines were the oldest co-operative and constituent carriers held stock in the corporation. All traffic movement was controlled by A.V.L. and the price was divided 75 per cent. to the carrier, 22 per cent, to the packer and 3 per cent. to the corporation to cover administrative costs. • Seven years ago art alteration in the policy of A.V.L. made conditions difficult for Canadian hauliers operating in both Canada and the U.S.A. 1 he other two co-operatives were therefore formed. Their systems were different inasmuch as stockholders received a dividend and members were not necessarily obliged to carry always at the co-operative's demand.

Four out of every five vehicles in Canada Were operated as part of a: co-operative and a high standard was required of the owners. In Canada it was illegal for any industrial organization to sell according to a published tariff. This was a preventive against monopolistic practices. However, every remover had a schedule of recommended rates from the Canadian Ware= housing Association.

Not only could return toads be provided by a co-operative but a member had the benefit of the amalgamated financial structure. If he were short of money, perhaps because of an outstanding bill, the co-operative could loan him money at a low rate of interest..

Another advantage was that all . members had agreed to a standard body specification with the trailer makers. As a result, $800 have been cut off the average price of $5,000.

Mr. Sparks said that in North America there were 10 Provinces and 48 States, each with different licensing, insurance and construction and use regulations. International transport in Western Europe, where there were far fewer countries,. would be less of a problem to develop.

Closer Ties In his annual report, Mr. Sidney Smith, retiring president, hoped for closer links with Continental road transport undertakings. The fringe of European international transport had not been touched by British carriers.

Mr, J. Lada, Paris, wished it to be resolved at the 1956 conference that the founder-members of the Association be no longer ex officio members of the directing committee of the Federation Internationale des Dernenageurs Inter nationaux. He thought it undemocratic that founder-members were in sufficient nunaber to outvote elected members. Although the present arrangement conferred stability in the formative stages of F.I.D.I., these had now been passed.

Mr. Sparks opposed the idea. He approved of the stabilizing influence which the founder-members could exercise.