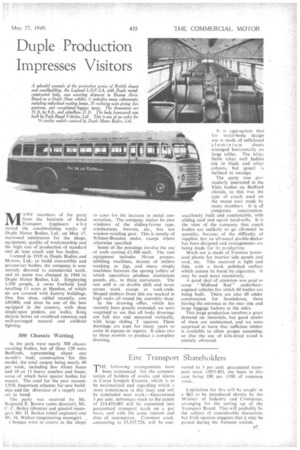 Page 15, 27th May 1949 — Duple Production Impresses Visitors
Close
Noticed an error?
If you've noticed an error in this article please click here to report it so we can fix it.
Keywords : Buses, Coachbuilder, Aluminium, Duple Coachbuilders

MANY Members of the party from the Institute of Road Transport Engineers w h 0 visited the coachbuilding works of Duple Motor Bodies, Ltd., on May. 17, expressed admiration. for the shops, equipment, quality of workmanship and the high rate of 'production of standard and de luxe each and bus bodies.

Formed in 1919 as Duple Bodies and Motors, Ltd., to build convertible and private-car bodies, the company is now entirely devoted to commercial work, and its name was changed in 1946 to Duple Motor Bodies, Ltd. Employing 1,300 people, it owns freehold land totalling 11 acres at Hendon, of which six are covered with factory buildings. One fine shop, added recently, cost £40,000, and must be one of the best equipped in the country, with deep single-span girders, cat walks, King electric hoists on overhead runways and well-arranged . natural and artificial lighting.

In the park were nearly 300 chassis awaiting bodies, but of these 120 were Bedfords, representing about one month's body construction 'for this model, the total output being nearly 40 per week, including five Alma buses and 10 or 11 heavy coaches and buses, some of which have Special bodies for export. The total for the year exceeds 1,950. Important schemes for new buildings and the diversion of a supply road are in hand.

Changes were in course in the shops

to cater for the increase in metal construction„ The company makes its own windows of the sliding-frame type. Windscreens, louvres, etc., but not window-winding gear, This is mostly of Wilmot-Breeden make, except where otherwise specified,

" Some of the pressings involve the use of tools costing £1,500 each. The tool equipment includes 50-ton presses, nibbling machines, dozens of millers working to jigs, and many simple machines between the sprung rollers of which operatives produce aluminium panels, etc., to three curvatures. The saw mill is on double shift and never ceases work except at week-ends. Shaped timbers from this are stacked in high racks all round the assembly shop.

In the drawing office, which has recently been greatly extended, we were surprised to see that all body drawings are Cull size and mounted vertically, with large sliding T squares. These drawings. are kept for many years to assist in repeats or repairs.' It takes two to three .months to produce a complete drawing.

It is appropriate that fm metal-body design use is made of celltdosed aluminium sheets arranged horizontally on large tables.. The white finish takes . well Indian ink in black and other colours, but pencil is inclinedto smudge.

The party was particularly interested in the Vista bodies on Bedford. chassis, • as this was the WO • of coach used on the recent tour made. by many members It is of • composite --construction, excellently, built and comfortable, with sliding roof and squab head-rolls. It is the view of the company that coach bodies are Unlikely to go all-metal in quantity, because of the difficulty of supplies, but an all-metal double-decker has been designed and arrangements are being -made for its production.

Much Use is made of Formica laminated plastic for interior side panels and roof, etc. This material is light and thin, with a hard, polished surface which cannot be burntby cigarettes. It may be used more extensively.

A good deal of attention was paid to some " Midland Red" underfloorengined vehicles for which60 bodies are being built. There are also 60 under construction for Southdown, these having the entrance at the rear side and large luggage lockers at the sides. .

This large production inVolves a great demand on materials, but 'good stocks of these are maintained, and we were surprised to learn that sufficient timber is available to allow proper seasoning, so that the use of kiln-dried wood is entirely obviated.