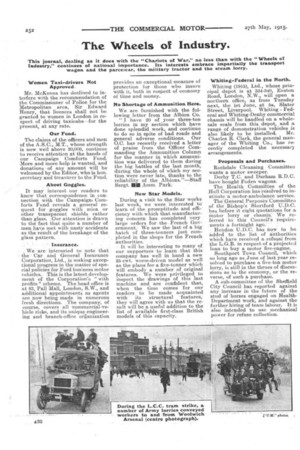 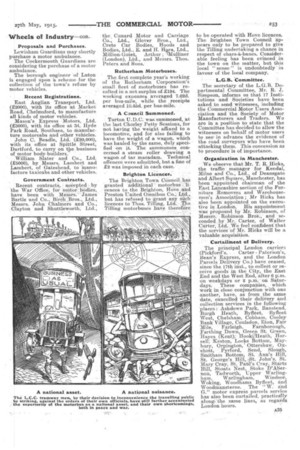 Page 8, 27th May 1915 — The Wheels of Industry.
Close
Noticed an error?
If you've noticed an error in this article please click here to report it so we can fix it.
Keywords : Steam Wagon, Byfleet, Ford Motor Company

This journal, dealing as it does with the "Chariots of War," no less than with the "Wheels of Industry," continues of national importance. Its interests embrace impartially the transport wagon and the parcelear, the military tractor and the steam lorry.

Mr. McKenna has declined to interfere with the recommendation of the Commissioner of Police for the Metropolitan area, Sir Edward Henry, that licences shall not be granted to women in London in respect of driving taxicabs—for the present, at any rate.

The claims of the officers and men of the A.S.C., MT., whose strength is now well above 20,000, continue to receive attention at the hands of our Campaign Comforts Fund. More and more help is wanted, and donations of any amount will be welcomed by the Editor, who is hon. secretary and treasurer to the Fund.

It may interest our readers to know that correspondence in connection with the Campaign, Comforts Fund reveals a general request for goggles with mica or other transparent shields rather than glass. :Our attention is drawn to the fact that quite a number of men liav,e met with nasty accidents as -the result of the breakage of the glass pattern.

, We are interested to note that the Car and General Insurance Corporation, Ltd.' is making exceptional progress in the matter of special policies for Ford business motor vehicles., This is the latest development of the Corporation's " with profits" scheme. The head office is at 83, Pall Mall, London, S.W., and additional appointments as agents are now being-made in numerous fresh directions. The company, of course, covers all 'commercial-yehick risk's, and its unique engineering and branch-office orRanization

provides an exceptional measure of protection for those who insure with it, both in respect of economy of time and money.

No Shortage of Ammunition Here.

We are furnished with the following letter from the Albion Co.

" I have 20 of your three-ton lorries in my section which have done splendid work, and continue to do so in spite of bad roads and general adverse conditions. Our O.C. has recently received a letter of praise from the Officer Commanding the Ammunition Column for the manner in which ammunition was delivered to them during the big battles of the last month, during the whole of which my section were never late, thanks to the reliability of the Albions."—Staff

During a visit to the Star works last week, we were interested to learn of the promptitude and efficiency with which that manufacturing concern has completed very large orders for the French Government; We saw the last of a big batch of three-tonners just completed in the shops for the French authorities. • It will be interesting to many of our supporters to learn that this company -has well in hand a new 25-cwt. worm-driven model as well as the plans for a five-tonner which will embody a number of original features. We were privileged to inspect the drawings of this last machine and are confident that, when the time comes for our readers to be made acquainted with its structural features, they will agree with us that the result will be a useful addition to the list of available first-class British models of this capacity.

Whiting-Federal in the North. Whiting (1915), Ltd., whose principal depot is at 334-340, Euston Road, London, N.W., will open a northern office, as from Tuesday next, the let June, at 5a, Slater Street, Liverpool. Whiting Federal and Whiting-Denby commercial chassis will be handled on a wholesale scale from this depot, and a, range of demonstration vehicles is

also likely to be installed. Mr. Charles R. Clark, the general manager of the Whiting Co., has recently completed the necessarj arrangements.

Derby T.C. and Durham R.D.C. have bought Foden wagons. The Health Committee of the Hull Corporation has resolved to institute 'a motor-ambulance service.

The General Purposes Committee of the Bishop's " Stortford U.D.C. has before it eight quotations for a Motor lorry or chassis: We referred to this Council's require ments a fortnight agO.• ,

Hendon U.D.C. has now to be added to the list of authorities which have received a. refusal. from the L.G.B. in respect of a projected Lean to buy, a motor fire-engine. Southport Town Council, which so long ago as June of last year resolved to purchase a -five-ton motor lorry, is still in the throes of discussions as to the economy, or the reverse, of such a purchase.

A sub-committee of the Sheffield City Council has reported against any increase in the future of the stud: of horses engaged on HealthDepartment work, and against the further hiring of team labour. It is also intended to use mechanical power for refuse collection. Proposals and Purchases.

The Cockermouth Guardians are considering the purchase of a motor ambulance.

The borough engineer of Luton is engaged upon it scheme for the collection of the town's refuse by motor vehicles.

East Anglian Transport, Ltd. (22000), with its office at Market Road, Chelmsford, to manufacture all kinds of motor vehicles.

Mason's Express Motors, Ltd. (23000), with its office at 34, Hyde Park Road, Southsea, to manufacture motorcabs and other vehicles.

John C. Beadle, Ltd. (X20,000), with its office at Spittle Street, Dartford, to carry on the business of motor body-builders:

William Slater and Co. Ltd. (25000), by Messrs. Lambert and Lambert, of Gateshead, to inanufacture taxicabs and other vehicles.

The first complete year's working of the Rotherham Corporation's small fleet of motorbuses has resulted in a net surplus of 2.194. The working expenses averaged 7.62d. per bus-mile, while the receipts averaged 10.65d. per bus-mile.

Turton U.D.C. waa summoned, at the last Chorley Petty Sessions, for not having the weight affixed to a locomotive, and for also failing to have the weight of a wagon, which was hauled by the same, duly specified -on it. The summonses concerned a steam roller drawing a wagon of tar macadam. Technical offences were admitted, but a fine of 22 was imposed in each case.

The Brighton, Town CCuncil has granted additional motorbus licences to the Brighton, Hove and Preston United Omnibus Co., Ltd,. but has refuted to -grant any ach licences to Thos. Tilling, Ltd. The Tilling motorbuses. have therefore to be operated with Hove licences. The Brighten Town Council appears only to be prepared to give the Tilling undertaking a chance in respect of chars-a-bancs. Considerable feeling has been evinced in the town on the matter, but this local " sense " is undoubtedly in favour of the local company.

The secretary of the L.G.B. Departmental Committee, Mr. R. J. Simpson, informs us that 17 Institutions and Societies have been asked to send witnesses, including the Commercial Motor Users Association and the Society of Motor Manufacturers and Traders. Wo are in a position to state that the Committee has decided to allow the witnesses on behalf of motor users to see. in advance the evidence of the road surveyors who have been attacking them. This concession as to procedure is of importance.

We observe that Mr. T. R. Hicks, the traffic manager for Kendal, Milne and Co., Ltd. of Deansgate and Albert Square Manchester, has been appointed chairman of the East Lancashire section of the Furniture Removers and Warehousemen's Association' Mr Hicks has also been appointed on the executive in London. His appointment Was proposed by Mr. Robinson, of Messre. • Robinson Bro., and seconded by Mr. Carter, of Walter Gaiter, Ltd. ,We feel confident that the services of Mr. Hicks will be a valuable acquisition.

h am, Warlingham, Windsor, Woking, Woodhams Byfleet, and Woodmansterne. The "W. and G." motor express parcels service has also been curtailed, practically along the same lines, as regards London hours.