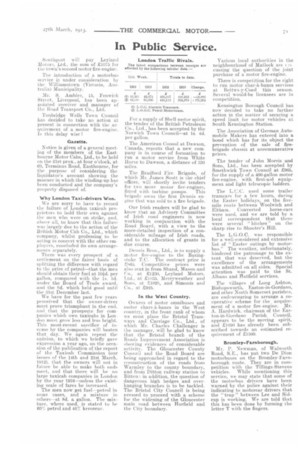 The introduction of a motorbus service is under consideration by the Willia.mstown (Victoria, Australia) Municipality, Mr. S. Ambler, 15, renwick Street, Liverpool, has been appointed receiver and manager of the Road Transport Co., Ltd.

Tunbridge Wells Town Council has decided to take no action at present in connection with the acquirement of a motor fire-engine. Is this delay wise ?

Notice is given of a general meeting of the members of the Eastbourne Motor Cabs, Ltd., to be held on the 21st prox., at four o'clock, at 69, Terminus Road, Eastbourne, for the purpose of considering the liquidator's account showing the manner in which the winding-up has been conducted and the company's property disposed of.

We are sorry to have to record the failure of London taxicab proprietors to hold their own against the men who were on strike, and, above all, to know that this failure was largely due to the action of the British Motor Cab Co., Ltd., which company, whilst professing to be acting in concert with the other employers, concluded its own arrangements separately.

There was every prospect of a settlement on the fairer basis of splitting the difference with regard to the price of petrol—that the men should obtain their fuel at 100. per gallon, compared with the is. 1d. under the Board of Trade award, and the Scl. which held good until the 31st December last.

We have for the past few years perceived that the owner-driver must prove triumphant in the end, and that the prospects for companies which own taxicabs in London 1/11[31 grow less and less bright. This most-recent sacrifice of income by the companies will hasten that day. We again repeat the opinion, to which we briefly gave expression a year ago, on the occasion of the publication of the report or the Taxicab Commission (our issues of the 14th and 21st. March, 1912), that the owners will not in future be able to make both ends meet, and that there will be no large taxicab companies in London by the year 1916—unless the existing scale of fares be increased.

The men now get fad—petrol in some cases, and a mixture in others—at 8d. a gallon. The mixture, where used, is stated to be 60 petrol and 40% kerosene.

For a supply of Shell motor spirit., the tender of the British Petroleum Co., Ltd., has been accepted by the Norwich Town Council—at is. 4d. per gallon.

The American Consul at Dawson, Canada, reports that a new company is in course of formation to run a motor service from White Horse to Dawson, a distance of 330 The Bradford Fire Brigade, of which Mn James Scott is the chief officer, will shortly invite tenders for two more motor fire-engines, fitted with turbine pumps. This brigade owns the first Dennis engine that was sold to a fire brigade.

Our Irish readers will be glad to know that an Advisory Committee of Irish road engineers is now working in conjunction with the Road Board, with a view to the more-detailed inspection of a considerable mileage of Irish roads, and to the allocation of grants in due course.

In the West Country.

Owners of motor omnibuses and motor chars-hebancs in the West country, in the front. rank of whom we must place the Bristol Tramways and Carriage Co., Ltd., of which Mr. Charles Challenger is the manager, will be glad to know that the Bristol branchof the Roads Improvement Association is showing evidences of considerable activity. The. Gloucester County Council and the Road Board are being approached in regard to the reconstruction of the roads from Warmley to the county boundary, and from Ditton railway station to Bitten in addition, the question of dangerous high hedges and overhanging branches is to be tackled. The Bristol City Council is being pressed to proceed with a scheme for the widening of the Gloucester main road between Horfield and the City boundary-. Various local authorities in the neighbourhood of Matlock are Is cussing the question of the joint purchase of a motor fire-engine.

There is competition for the right to run motor char-h-bancs services at Bettws-y-Coed this season. Several would-be licensees are in competition.

Kensington Borough Council has now decided to take no further action in the matter of securing a speed limit for motor vehicles at South-Kensington Station.

The Association of German Automobile Makers has entered into a bond which has for its object the prevention of the sale of firebrigade chassis at unremunerative prices.

The tender of John Morris and Sons, Ltd., has been accepted by Smethwiek Town Council at 2965, for the supply of a 400-gallon motor fire-engine, with first-aid equipment and light telescopic ladders.

The L.C.C. used some trailer tramcars for a few hours, during the Easter holidays, on the fivemile route between Woolwich and Eltham. Converted horse-cars were used, and we are told by a local correspondent that there were several " hitches " on the sharp rise to Shooter's Hill.

The L.G.O.C, was responsible for a well-considered and extensive list of " Easter outings by motorbus." The weather, unfortunately, hindered the patronage to the extent that was deserved, but the excellence of the arrangements was admitted on all sides. Special attention was paid to the St. Albans and Hatfield services.

The villages of Long Ashton, Bishopeworth, Easton-in-Gordano, and other North Somerset parishes, are endeavouring to arrange a .cooperative scheme for the acquirer merit of a motor fire-engine. Mr. A. Hardwick. chairman of the Eaeton-in-G'ordano Parish. Council, appears to be the moving spirit, and 21050 has already been subscribed towards an estimated requirement of 21500.

Mr. P. Newman, of Walwortle Road, SE., has put two De Dion motorbuses on the Bromley-Farnborough route. They are in competition with the Tillings-Stevens vehicles. While mentioning this service, we may state that some of the motorbus drivers have been warned by the police against their indicating to motorcar drivers that the "trap" between Lee and Sidcup is working. We are told that this has been done by forming the letter -T with the fingers.