RULES FOR INDICATORS ON HEAVY LORRIES 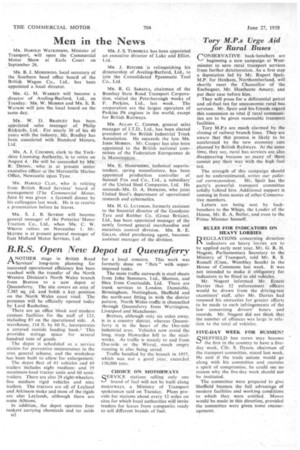 Page 46, 27th June 1958 — RULES FOR INDICATORS ON HEAVY LORRIES
Close
Noticed an error?
If you've noticed an error in this article please click here to report it so we can fix it.
Keywords : Ted Nugent, Truck

REGULATIONS concerning direction indicators on heavy, lorries are to be applied early next year, Mr. G. R. H. Nugent, Parliamentary Secretary to the Ministry of Transport, told Mr. R. S. Russell (Cons., Wembley South) in the House of Commons last week. It was not intended to make it obligatory for indicators to be fitted to old vehicles.

Mr. Nugent informed Mr. Ernest Davies that 52 enforcement officers would be drawn from the driving-test examiners' staff, after Mr. Davies had renewed his entreaties for greater efforts to be made to curb infringements of the law concerning drivers' hours and records. Mr. Nugent did not think that the number of offences was large in relation to the total of vehicles.

FIVE-DAY WEEK FOR 'BUSMEN? QHEFFIELD bus crews may become the first in the country to have a fiveday week, Cllr. S. Dyson, chairman of the transport committee, stated last week. He said if the trade unions would go along with his committee and exercise a spirit of compromise, he could see no reason why the five-day week should not be instituted.

The committee were prepared to give Sheffield busmen the full advantage of modern facilities and working conditions to which they were entitled. Moves would be made in this direction., provided the committee were given some encouragement.