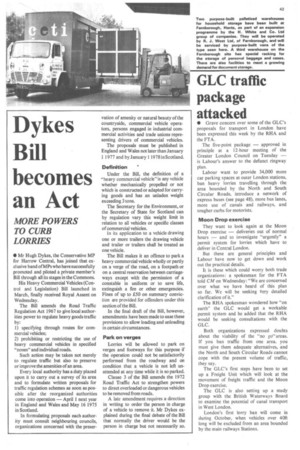 • Mr Hugh Dykes, the Conservative MP for Harrow Central, has joined that ex clusive band ofMPs who have successfully promoted and piloted a private member's Bill through all its stages in the Commons.

The Bill amends the Road Traffic Regulation Act 1967 to give local authorities power to regulate heavy goods traffic by: 1) specifying through routes for commercial vehicles; 2) prohibiting or restricting the use of heavy commercial vehicles in specified "zones" and individual roads.

Such action may be taken not merely to regulate traffic but also to preserve or improve the amenities of an area.

Every local authority has a duty placed upon it to carry out a survey of its area and to formulate written proposals for traffic regulation schemes as soon as possible after the reorganized authorities come into operation — April 1 next year in England and Wales and May 16 1975 in Scotland.

In formulating proposals each authority must consult neighbouring councils, organizations concerned with the preser vation of amenity or natural beauty of the countryside, commercial vehicle operators, persons engaged in industrial commercial activities and trade unions representing drivers of commercial vehicles.

The proposals must be published in England and Wales not later than January 1 1977 and by January 1 1978 inScotland.

Definition Under the Bill, the definition of a "heavy commercial vehicle" is any vehicle whether mechanically propelled or not which is constructed or adapted for carrying goods and has an unladen weight exceeding 3 tons.

The Secretary for the Environment, or the Secretary of State for Scotland can by regulation vary this weight limit in relation to all vehicles or specific classes of commercial vehicles.

in its application to a vehicle drawing one or more trailers the drawing vehicle and trailer or trailers shall be treated as one vehicle.

The Bill makes it an offence to park a heavy commercial vehicle wholly or partly on a verge of the road, on a footpath or on a central reservation between carriageways except with the permission of a constable in uniform or to save life, extinguish a fire or other emergencies. Fines of up to £50 on summary conviction are provided for offenders under this section of the Bill.

In the final draft of the Bill, however, amendments have been made to ease these provisions to allow loading and unloading in certain circumstances.

Park on verges Lorries will be allowed to park on verges and footways for this purpose if the operation could not be satisfactorily performed from the roadway and on condition that a vehicle is not left unattended at any time while it is so parked.

Clause 3 of the Bill amends the 1972 Road Traffic Act to strengthen powers to direct overloaded or dangerous vehicles to be removed from roads.