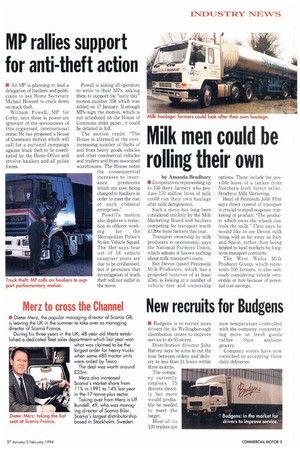 • An MP is planning to lead a delegation of hauliers and politicians to ask Home Secretary Michael Howard to crack down on truck theft.

William Powell, MP for Corby, says those in power are ignorant of the seriousness of this organised, international crime. He has proposed a House of Commons motion which will call for a national campaign against truck theft to be coordinated by the Home Office and involve hauliers and all police forces. Powell is asking all operators to write to their MPs, asking them to support the "early day" motion number 358 which was tabled on 17 January. If enough MPs sign the motion, which is not scheduled on the House of Commons order paper, it could be debated in full.

The motion reads: "The House is alarmed at the everincreasing number of thefts of and from heavy goods vehicles and other commercial vehicles and trailers and from associated warehouses. The House notes the consequential increases to insur ance premiums which are now being charged to hauliers in order to meet the cost of such criminal enterprises."

Powell's motion also deplores a reduction in officers work ing for the Metropolitan Police's Stolen Vehicle Squad. The Met says four out of 18 vehicle examiner posts are due to be civilianised, but it promises that investigation of truck theft will not suffer in the move.