THE BRITISH Road Federation has bitterly attacked the Government over the way it has underspent on roads. 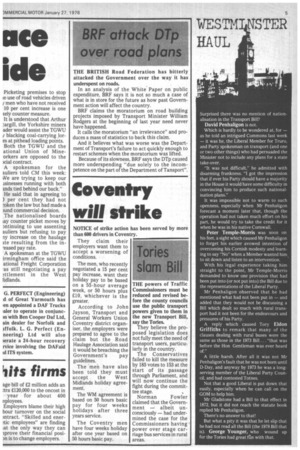 Page 7, 27th January 1978 — THE BRITISH Road Federation has bitterly attacked the Government over the way it has underspent on roads.
Close
Noticed an error?
If you've noticed an error in this article please click here to report it so we can fix it.
Keywords : Belgischer Rundfunk, Moratorium, Business / Finance, Politics

In an analysis of the White Paper on public expenditure, BRF says it is not so much a case of what is in store for the future as how past Government action will affect the country.

It calls the moratorium "an irrelevance" and produces a mass of statistics to back this claim.

And it believes what was worse was the Department of Transport's failure to act quickly enough to restart schemes when the moratorium was lifted.

Because of its slowness, BRF says the DTp caused more underspending "due solely to the incompetence on the part of the Department of Tans port".