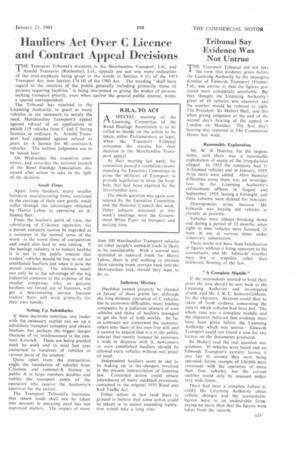 Page 31, 27th January 1961 — Hauliers Act Over C Licence and Contract Appeal Decisions
Close
Noticed an error?
If you've noticed an error in this article please click here to report it so we can fix it.
Keywords : Bus, Motoring Taxation In The United Kingdom, Salter Report, Business / Finance

THE Transport Tribunal's decisions in the Merchandise Transport, Ltd., and Arnold Transport (Rochester), Ltd., appeals are just one more indication of the over-emphasis being given to the words in Section 9 (1) of the 1953 Transport Act, now Section 174 (4) of the 1960 Act, The wording "shall have regard to the interests of the public generally including primarily those of persons requiring facilities '" is being interpreted as giving the wishes of persons seeking transport priority, even when against the general public interest, writes a special correspondent.

The Tribunal has remitted to the Licensing Authority, to grant as many vehicles as are necessary to satisfy the need, Merchandise Transport's appeal against refusal of an application to switch 119 vehicles from C and C hiring licences to ordinary A. Arnold Transport had appealed against refusal to grant an A licence for 40 contract-A vehicles. The written judgments are to be issued later.

On Wednesday the executive committee, and yesterday the national council of the Road Haulage Association, discussed what action to take in the light of the decision.

Apart from hauliers, many smaller furniture manufacturing firms, restricted to the carriage of their own goods, could suffer through the advantages obtained by Harris Lcbus in operating an Alicence fleet.

From the haulier's point of view, the subsidizing of C-licence operation—for a parent company cannot be regarded as a customer in the normal sense of the word—is the worst form of competition and could also lead to rate cutting. if the haulage industry is to remain healthy it is not in the public interest that traders' vehicles should be free to cut out established hauliers just when it suits the parent company. The ultimate result can only be to the advantage of the big industrial concerns at the expense of the smaller companies who, as • genuine hauliers are forced out of business, will get a deteriorating service because traders' •fleets will work primai-ily for their own benefit.

If these decisions continue, any trader with the necessary capital can set up a subsidiary transport company and obtain licences, but perhaps the bigger danger (because of its insidiousness) is the contract A-switch. These are being granted week by week and in total last year amounted to hundreds of vehicles in various parts of the country.

Quite apart from the competitive angle, the translation of vehicles from C-licence and contract-A licence to public A in large numbers doubles and trebles the transport assets of the operators who receive the Authority's approval for the switch.

The Transport Tribunal's insistence that return loads shall not be taken into account in assessing need has not improved matters. The impact of more than 100 Merchandise Transport vehicles on other people's outward loads is likely to be considerable. With a normal user restricted to outward loads for Harris Lebus, there is stilt nothing to prevent them running trunk services back into the Metropolitan area, should they want to do so.

Judicious Mixture Hardship cannot properly he pleaded in favour of these grants for, although the long-distance operation of C vehicles has its economic difficulties, many trading companies by a judicious mixture of own vehicles and those of hauliers managed to get the best of both worlds. So far as contracts are concerned the customer enters into them of his own free will and it cannot be argued that it is in the public interest that merely because he expresses a wish to dispense with it, newcomers or even established hauliers should be allowed extra vehicles without real proof of need.. Independent hauliers seem at last to be waking up to the.dangers involved in the present interpretation of licensing law. Concerted action could obtain amendment of many outdated provisions contained in the original 1433 Road and Rail Traffic Act.

Either action in law (and there is ground to believe that some action could be taken) or to secure amending legislation would take a long time.