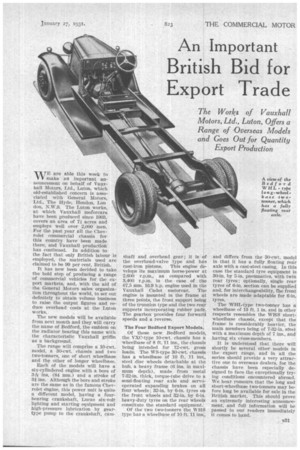 Page 49, 27th January 1931 — An Important
Close
Noticed an error?
If you've noticed an error in this article please click here to report it so we can fix it.

The Works of Vauxhall Motors, Ltd., Luton, Offers a Range of Overseas Models and Goes Out for Quantity Export Production

WE are able this week to make an important announcement on behalf of Vauxhall Motors, Ltd., Luton, which old-established concern is associated with General Motors, Ltd., The Hyde, Hendon, Lon don, N.W.9. The Luton works, at which Vauxhall motorcars

For the past year all the Chevrolet commercial chassis for this country have been made there, and Vauxhall production has continued. In addition to the fact that only British labour is employed, the materials used are claimed to be 99 per cent. British.

It has now been decided to take the bold step of producing a range of commercial vehicles for the export markets, and, with the aid of the General Motors sales organization throughout the world, to set out definitely to obtain volume business to raise the output figures and re duce overhead costs at the Luton works.

The new models will be available from next month and they will carry the name of Bedford, the emblem on the radiator bearing this name with the characteristic Vauxhall griffin as a background.

The range will comprise a 10-cwt. model, a 30-cwt. chassis and two two-tonners, one of short wheelbase and the other of longer wheelbase.

Each of the models will have a six-cylindered engine with a bore of 3-Pgins. (84 mm.) and a stroke of 31 ins. Although the bore and stroke are the same as in the famous Chevrolet engine, this power unit is quite a different model, having a fourbearing crankshaft, Lucas six-volt lighting and starting equipment and high-pressure lubrication by geartype pump to the crankshaft, cam

shaft and overhead gear ; it is of the overhead-valve type and has

cast-iron pistons. This engine develops its maximum horse-power at 2,600 r.p.m., as compared with 3,400 r.p.m. in the case of the 67.5 mm. 16.9 h.p. engine used in the Vauxhall Cadet motorcar. The engine is mounted in the frame at three points, the front support being of the trunnion type and the two rear supports incorporating rubber pads. The gearbox provides four forward speeds and a reverse.

Of these new Bedford models, the VXC-type 10-cwt. chassis has a wheelbase of 8 ft, 11 ins., the chassis being intended for 12-cwt. gross loads. The WS-type 30-cwt. chassis has a wheelbase of 10 ft. 11 inn., steel disc wheels detachable at the hub, a heavy frame (6 ins, in maximum depth), made from metal 7-32-in, thick, torque-tube drive to a semi-floating rear axle and servooperated expanding brakes on all four wheels; 32-in. by 6-in. tyres on the front wheels and 32-in. by 6-in. heavy-duty tyres on the rear wheela constitute the standard equipment.

and differs from the 30-cwt. model in that it has a fully floating rear axle with a cast-steel casing. In this case the standard tyre equipment is 30-in. by 5-in, pneumatics, with twin rear tyres; optionally, single rear tyres of 6-in. section can be supplied and, for interchangeability, the front wheels are made adaptable for 6-in. tyres.

The WHIJ-type two-tonner has a wheelbase of 13 ft. 1 in. and in other respects resembles the WHS shortwheelbase chassis, except that the frame is considerably heavier, the main members being of 7-32-in. steel with a maximtun depth of 7 ins., and having six cross-members.

It is understood that there will shortly be several other models in the export range, and in all the series should provide a very attractive one to overseas dealers, for the chassis have been especially designed to face the exceptionally trying conditions encountered abroad. We hear rumours that the long and short-wheelbase two-tanners may be fore long be available for sale in the British market. This should prove an extremely interesting announcement, and full information will be passed to our readers immediately it comes to hand.