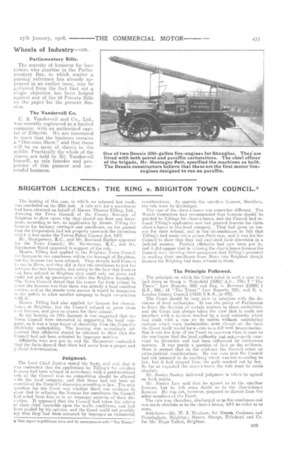 The hearing of this case, to which we referred last week, was concluded on the 20th inst. A rule nisi for a mandamus had been obtained on behalf of Messrs. Thomas Tilling, Ltd., directing the TownCouncil of the County Borough of Brighton to show cause why they should not hear and determine, according to law, an application by Messrs. Tilling fur licences for hackney carriages and omnibuses, on the ground that the Corporation had not properly exercised the discretion wheh it. had under the Towns Police Clauses Act, 1847.

Mr. Montgomery, K.C., and Mr. Rowland Harker appeared fir the Town Council; Mr. Macmorran, K.C., and Mr. Barrington-Ward appeared in support of the rule. Messrs. Tilling had applied to the Brighton Town Council Inc licences to run omnibuses within the borough of Brighton, but the licences had been refused. They already held licences to run in Hove, and they did in fact run omnibuses to and fro le?tween the two boroughs, but owiug to the fact that licences hid been refused in Brighton they ceilld only set down and cauld not pick up passengers within the Brighton boundary. The Town Council stated that the reason for their refusal to grant the licences was that there was already a local omnibus service, and as the streets were narrow it would be dangerous to the public to allow another company to begin competition with it.

Messrs. Tilling had also applied for licences for chars-hLanes at Brighton, but the Council refused to grant them • secill licences, and gave no reason for their refusal.

. At the bearing on 12th January it was suggested that the Town Council were interested in. supporting the local company, as it was a large buyer of electricity from the Council's electricity undertaking. The hearing was accordingly adjourned that affidavits should be obtained to show that the Council had mit been actuated by improper motives. Affidavits were now put in, and Mr. Macmorran contended that the facts showed that there had never been a proper and j.iclicial determination.

The Lord Chief Justice stated the facts, and said that it was contended that the application by Tilling's for omnibus licences had been. refused in accordance with a predetermined rule of the Council that no competition should be allowed with the local company, and that there had not been an exercise of the Council's discretion according to law. The only question for the Court was whether there was evidence to show that in refusing the licences for omnibuses the Council Lad acted from bias or in an improper exercise of their discretion. It appeared that the Council had taken the advice of their chief constable upon the traffic conditions, and had been guided by his opinion, and the Court could not possibly say that they. had been actuated by improper_ or immaterial This report is published from and by arrangement with 'The Times." considerations. As regards the omnibus licences, therefore, the rule must be discharged. The ease of the chars-a-banes was somewhat different. The Watch Committee had recommended that -lieences should 'be granted to Tillings for chars-a-bancs, and the Council had ye fused Tilling's application and had granted licences for extrz chars-ii-bancs to theplocal company. They had given no reason for their refusal, and in the circumstances he felt that Tilling's had made out a 'prima facie ease, and it was for the Council to show that they had exercised their -discretion in a judicial manner. Further .affidayits had now been put in, and it. did appear that in refusing the char-a-bancs licences the Council wore ishowing their annoyance that Tilling's persisted in sending their omnibuses from Hove into Brighton though licences for Brightme had been refused. to them.

The Court should be very slow to interfere with the decisions of local authorities. It was the.poliey of Parliament to leave the decision of .certain matters to those authorities, and the 'Court had always taken the view that it could not interfere with a decision reached by a, local authority which had dealt with a case. on its merits without considering matters which were inadmissible, even though Oil the facts the Court itself would halve come to a dill 'rent determination. But it was the duty of the Court to interfere when it came to the conclusion thet the local authority had non Properly exercised its discretion and had been influenced by' extraneous matters. It was purely a question of fact on the evidence. Here it seemed that on the evidence the Council acted on extra-judicial considerations. He was sure teat the Council had not intended to do anything which wasnoti according to law, but it had strayed from, the path marked out by law. So far as regarded the ehars-e-banes the rule must be made absolute.

Mr. Justice Sankey delivered judgment in which lie agreed. on both points. 141r. Justice Low said that he agreed as to the omnibus licences, but he felt some doubt as to the char-ii-bancs licences. He was not, however, prepared todissent from the other members of the Court.

The rule was therefore, discharged as to the omnibuses and. was made absolute as to the chars-a-banes, witle no order as to costs.