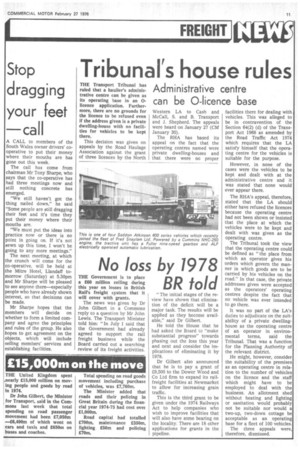 THE Government is to place a £60 million ceiling during this year on losses in British Rail's freight system that it will cover with grants.

The news was given by Dr John Gilbert in a Commons reply to a question by Mr John Lewis. The Transport Minister told him: "In July I said that the Government had already agreed to support the rail freight business while the Board carried out a searching review of its freight activities. "The initial stages of the review have shown that elimination of the deficit will be a major task. The results will be applied as they become available," said Dr Gilbert.

He told the House that he had asked the Board to "make substantial progress" towards phasing out the loss this year and next and consider the implications of eliminating it by 1978.

Dr Gilbert also announced that he is to pay a grant of £9,500 to the Dower Wood and Co Ltd firm to expand its railfreight facilities at Newmarket to allow for increasing grain traffic.

This is the third grant to be given under the 1974 Railways Act to help companies who wish to improve facilities that will also have some bearing on the locality. There are 18 other applications for grants in the pipeline.