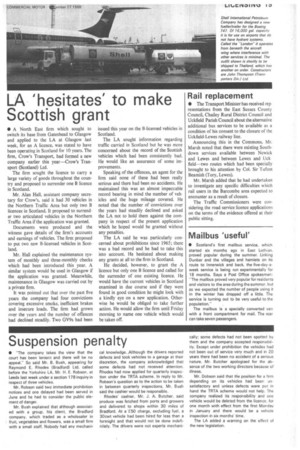 • The Transport Minister has received representations from the East Sussex County Council, Chailey Rural District Council and Uckfield Parish Council about the alternative additional bus services to be available as a condition of his consent to the closure of the Uckfield-Lewes railway line.

Announcing this in the Commons, Mr. Marsh noted that there were existing Southdown services available between Newick and Lewes and between Lewes and Uck field—two routes which had been specially brought to his attention by Col. Sir Tufton Beamish (Tory, Lewes).

Mr. Marsh added that he had undertaken to investigate any specific difficulties which rail users in the Barcombe area expected to encounter as a result of closure.

The Traffic Commissioners were considering the road service licence applications on the terms of the evidence offered at their public sitting.