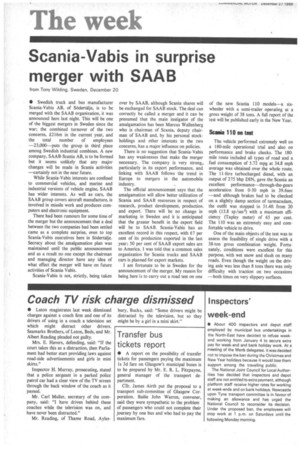 from Tony Wilding. Sweden, December 20 • Swedish truck and bus manufacturer Scania-Vabis AB, of Sodertalje, is to be merged with the SAAB organization, it was announced here last night. This will be one of the biggest mergers in Sweden since the war; the combined turnover of the two concerns, £216m in the current year, and the total number of employees — 23,000 puts the group in third place among Swedish industrial combines. A new company, SAAB-Scania AB, is to be formed but it seems unlikely that any major changes will be made in Scania activities — certainly not in the near future.

While Scania-Vabis interests are confined to commercial vehicles, and marine and industrial versions of vehicle engine, SAAB has wider interests. As well as cars, the SAAB group covers aircraft manufacture, is involved in missile work and produces computers and electronic equipment.

There had been rumours for some time of the merger but the announcement that a deal between the two companies had been settled came as a complete surprise, even to top Scania-Vabis executives here in Sbdertalje. Secrecy about the amalgamation plan was maintained until the public announcement and as a result no one except the chairman and managing director have any idea of what effect the merger will have on future activities of Scania-Vabis.

Scania-Vabis is not, strictly, being taken over by SAAB, although Scania shares will be exchanged for SAAB stock. The deal can correctly be called a merger and it can be presumed that the main instigator of the amalgamation has been Marcus Wallenberg who is chairman of Scania, deputy chairman of SAAB and, by his personal stockholdings and other interests in the two concerns, has a major influence on policies.

There is no suggestion that Scania-Vabis has any weaknesses that make the merger necessary. The company is very strong,. particularly in its export performance, and linking with SAAB follows the trend in Europe to mergers in the automobile industry.

The official announcement says that the amalgamation will allow better utilization of Scania and SAAB resources in respect of research, product development, production. and export. There will be no change in marketing in Sweden and it is anticipated that the greater benefit in the export field will be to SAAB. Scania-Vabis has an excellent record in this respect, with 67 per cent of its production exported in the last year; 50 per cent of SAAB export sales are to America. I was told that a common sales organization for Scania trucks and SAAB cars is planned for export markets.

I am fortunate to be in Sweden for the announcement of the merger. My reason for being here is to carry out a road test on one of the new Scania 110 models—a sixwheeler with a semi-trailer operating at a gross weight of 38 tons. A full report of the test will be published early in the New Year.

The vehicle performed extremely well on a 180-mile operational trial and also on performance and brake checks. The 180mile route included all types of road and a fuel consumption of 5.72 mpg at 34.8 mph average was obtained over the whole route. The 11-litre turbocharged diesel, with an output of 275 bhp DIN, gave the Scania an excellent performance—through-the-gears acceleration from 0-30 mph in 39.6sec —and although brakes had to be checked on a slightly damp section of tarmacadam, the outfit was stopped in 31.4ft from 20 mph (13.8 sp /sec') with a maximum efficiency (Tapley meter) of 65 per cent. The 110 was an extremely easy and comfortable vehicle to drive.

One of the main objects of the test was to assess the feasibility of single drive with a 38-ton gross combination weight. Fortunately, conditions were excellent for this purpose, with wet snow and slush on many roads. Even though the weight on the driving axle was less than 8 tons there was only difficulty with traction on two occasions —both times on very slippery surfaces.