PRICE-FIXING ON ELECTRICS SHOULD BE ENDED' 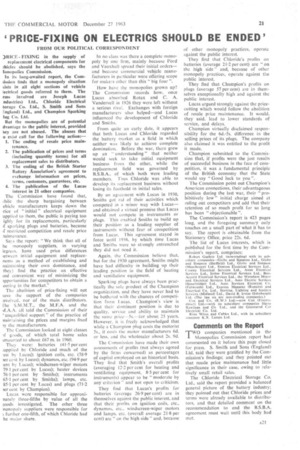 FROM OUR POLITICAL CORRESPONDENT )RICE FIXING in the supply of replacement electrical components for hicles should be abolished, says the fonopolies Commission:

But the monopolies are of potential dvaniage to the public interest, provided hey are not abused. The abuses that o exist call for the following action: 1. The ending of resale price maintenance.

4. The publication of the Lucas interest in 21 other companies. The Commission have found that, /Ilk the sharp bargaining between ehicle manufacturers keeps down the rice of " electrical equipment upplicd to them, the public is paying too ighly for its replacements, particularly sparking plugs and batteries, because if restricted competition and resale price aaintenance. Saks the report: "We think that all of he monopoly suppliers, in varying legrees. have used price differences oetweca initial equipment and replacenents as a method of establishing and naintaining their own dominance, and they) find the practice an effective old convenient way of minimizing the >pportunities for competitors to obtain a ootine in the market." The abolition of price-fixing will not lave the support of the companies nvolvcd, nor of the main distributors. [he S.M.M.T., the M.F.A. and the A.A.A. all told the Commission of their unqualified support" of the practice of tiaimaining the prices and margins fixed )1+ the manufacturers. The Commission looked at eight classes )1' goods, of which total home sales 'mounted to about £67 m. in 1960. They were: batteries (41.5 per cent ,upplied by Chloride and much of the .est by Lucas); ignition coils, etc. (78-9 ter cent by Lucas); dynamos, etc. (94.9 per :ent by Lucas); windscreen-wiper motors 79.1 per cent by Lucas); heater devices 76.1 per cent by Smiths); instruments 65.1 per cent by Smiths); lamps, etc. 85-1 per cent by Lucas) and plugs (71.2 ter cent by Champion). Lucas were responsible for approxinatelv three-fifths by value of all the ;oods investigated. The other three nonopoly suppliers were responsible for t further one-fifth, of which Chloride had he major share. In no class was there a complete monopoly by one firm, mainly because Ford and Vauxhall spread their initial orders— and because commercial vehicle manufacturers in particular were offering scope for makers other than this "big four ".

How have the monopolies grown up? The Commission records how, once Lucas absorbed Rotax and C. A. Vandervell in 1926 they were left without a serious rival. Exchanges with foreign manufacturers also helped—and Lucas influenced the development of Chloride and Smiths.

From quite an early date, it appears that both Lucas and Chloride regarded the battery market as a field in which neither was likely to achieve complete domination. Before the war, there grew up an " understanding" that neither would seek to take initial equipment business front the other, while the replacement field was governed by B.S.B.A., of which both were leading members. Thus Chloride was able to develop its replacement business without losing its foothold in initial sales. By an agreement with Lucas in 1930, Smiths got rid of their activities which competed in a minor way with Lucas— and obtained a virtual promise that Lucas would not compete in instruments or plugs. This enabled Smiths to build up their position as a leading supplier of instruments without fear of competition from Lucas. This agreement stayed in force until 1956, by which time Lucas and Smiths were so strongly entrenched they did not need it. Again, the Commission believe that, but for the 1930 agreement, Smiths might have had difficulty in building up their leading position in the field of heating and ventilation equipment.

Sparking plugs have always been practically the sole product of the Champion organization, and they have never had to be bothered with the chances of competition front 1.ucas. Champion's view is that their dominant position is due to quality, service and ability to maintain the same price-5s.-1or about 25 years. However, it is freely acknowledged that while a Champion plug costs the motorist 5s., it costs the motor manufacturers 6d. or less, and the wholesaler about 2s. 9d.

The Commission have made their own assessments of profits (not always agreed by the firms concerned) as .percentages of capital employed on an historical basis. They find that Smith's overall profits (averaging 12.2 per cent for heating and ventilating equipment, 8.3 per cent for instruments) appear to be "moderate by any criterion and not open to criticism.

Champion submitted to the Commission that, if profits were the just results of successful business in the face of competition, it was a fundamental principle of the British economy that the State would say "Good luck to you ".

The Commission point out Champion's American connections, their advantageous position during the last war, their "prohibitively low" initial charge aimed at ruling out competitors and add that their retention of so much profit for so long has been "objectionable ". The Commission's report is 423 pages long, and the foregoing summary only touches on a small part of what it has to say. The report is obtainable from the Stationery Office, price 22s. 6d.

The list of Lucas interests, which is published for the first time by the Commission's report, comprises:

Comments on the Report

TWO companies mentioned in the i Monopolies Commission report had commented on it before this page closed for press. S. Smith and Sons (England) Ltd. said they were gratified by the Cornmission's findings; and they pointed out that resale price maintenance had little significance in their case, owing to relatively small retail sales. The Chloride Electrical Storage Co. Ltd., said the report provided a balanced general picture of the battery industry; they pointed out that Chloride prices and terms were already available to distributors, and that detailed comment on the recommendation to end the B.S.B.A. agreement must wait until this body had met.