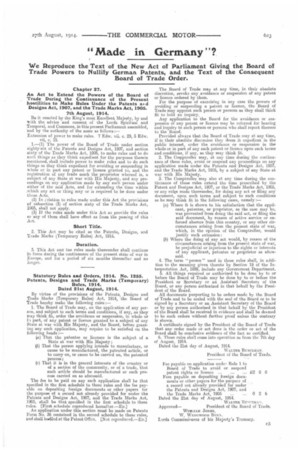 Page 7, 27th August 1914 — " Made in Germany'?
Close
Noticed an error?
If you've noticed an error in this article please click here to report it so we can fix it.

An Act to xtend the Powers of the Board of Trade During the Continuance of the Present hostilities to Make Rules Under the Patents aid Designs Act, 1907, and the Trade Marks Act, 1905.

Be it enacted by the King's most Excellent Majesty, by and svith the advice and consent of the Lords Spiritual and Temporal, and Commons, in this present Parliament assembled, and by the authority of the same as follows :— Extension of power to make rules. 7 Edw. vii. c. 29, 5 Edw. vii, c. 15.

1.—(1) The power of the Board of Trade under section

eighty-six of the Patents and Designs Act, 1907, and section eixty of the Trade Marks Act, 1905, to make rules and to do euch things as they think expedient for the purposes therein mentioned, shall include power to make rules arid to do such things as they think expedient fur avoiding or suspending in whole or in part any patent or licence granted to, and the regietration of any trade mark the proprietor whereof is, a subject of any State at war with His Majesty, and any proceedings on any application made by any such person under either of the said Acts, and for extending the time within ..whioh any act or thing may or is required to be done under those Acts.

(9) In relation to rulee made under this Act the provisions of subsection (3) of section sixty of the Trade Marks Act, 1905, shall not apply.

(3) If the roles made under this Act so provide the rules or any of them shall have effect as from the passing of this Act.

2. Thie Act may be cited as the Patents, Designs, and Trade Marks (Temporary Rules) Act, 1914.

3. This Act and tire rules made thereunder shall continue in force during the continuance of the present state of war in Europe, and for a period of six months thereafter and no longer.

By virtue of the provisions of the Patents. Designs and Trade Marks (Temporary Rules) Act, 1914, the Board of Trade hereby snake the following rules:— I. The Board of Trade may, on the application of any person, and subject to such terms and conditions, if any, as they may think fit, order the avoidance or suspenaion, in whole or in part, of any patent or licence granted to a subject of any State at war with His Majesty, and the Board, before panting any such application, may require to be satisfied on the following heads :— (a) That the patentee or licensee is the subject of a State at war with His Majesty;

(c) That it is in the general_ interests of the country or of a section of the community, or of a trade, that such article should be manufactured or such process carried on as aforesaid.

Any application to the Board for the avoidance or suspension of any patent or licence may he referred for hearing and inquiry to such person or persons who shall report thereon to the Board.

Provided always that the Board of Trade may at any time, if in their absolute discreiiion they deem it. expedient in the public interest, order the avoidance or suspension in the whole or in part of any such patent or licence upon such terms and conditions, if any, as they may think fit.

(a) Where it is shown to his satisfaction that the appli

cant, patentee, or proprietor, as the ease may be, was prevented from doing the said act, or filing the said document, by reason of active service or enforced absence from this country, or any other circumstances arising from the present state of war, which, in the opinion of the Comptroller, would justify such extension: (1.) Where the doing of any act would, by reason of the circumstances arising from the present state of war, be prejudicial or injurious to the rights or interests of any applicant, patentee or proprietor as aforesaid.

4. The term 'person" used in these rules shall, in addition to the meaning given thereto by Section 19 of the Interpretation Act, 1889, include any Government Department.

All documents purporting to be orders made by the Board of Trade and to be sealed with the seal of the Board or to be signed by a Secretary or an Assistant Secretary of the Board or by any person authorized in that behalf by the President of the Board shall be received in evidence and shall be deemed to be such orders without further proof unless the contrary is shown.

A certificate signed by the President of the Board of Trade that any order made or act done is the order or act of the Board shall be conclusive evidence of the fact so certified.

6. These rules shall come into operation as from the 7th day of August. 1914.