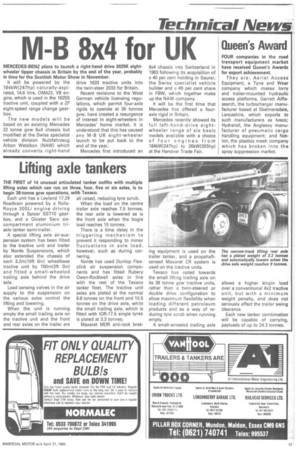 Page 19, 27th April 1985 — Lifting axle tankers
Close
Noticed an error?
If you've noticed an error in this article please click here to report it so we can fix it.

THE FIRST of 14 unusual articulated tanker outfits with multiple lifting axles which can run on three, four, five or six axles, is to begin 38-tonne gcw operations, with Texaco.

Each unit has a Leyland 17.29 Roadtrain powered by a RollsRoyce 300Li engine driving through a Spicer SST10 gearbox, and a Gloster Saro sixcompartment aluminium triaxle tanker semi-trailer.

A special lifting axle air-suspension system has been fitted to the tractive unit and trailer by Norde Suspensions, which also extended the chassis of each 3.2m(10ft 6in) wheelbase tractive unit by 700m(2ft 3in) and fitted a small-wheeled trailing axle behind the drive axle.

Load sensing valves in the air supply to the suspension on the various axles control the lifting and lowering.

When the unit is running empty the small trailing axle on the tractive unit and the front and rear axles on the trailer are all raised, reducing tyre scrub.

When the load on the centre trailer axle reaches 7.5 tonnes, the rear axle is lowered as is the front axle when the bogie load reaches 15 tonnes.

There is a time delay in the triggering mechanism to prevent it responding to minor fluctuations in axle load, however, such as during cornering.

Norde has used Dunlop Flexolink air suspension components and has fitted Rubery Owen-RockWell axles in line with the rest of the Texaco tanker fleet. The tractive unit axles are plated at the normal 6.6 tonnes on the front and 10.5 tonnes on the drive axle, while the small trailing axle, which is fitted with 10R-17.5 single tyres is plated at 3.3 tonnes.

Texaco has opted towards the small lifting trailing axle on its 38 tonne gcw tractive units, rather than a twin-steered or double drive configuration to allow maximum flexibility when loading different petroleum products and as a way of reducing tyre scrub when running empty.

A small-wheeled trailing axle allows a higher kinpin load over a conventional 4x2 tractive unit, but with a minimum weight penalty, and does not seriously affect the trailer swing clearance.

Each new tanker combination will be capable of carrying, payloads of up to 24.3 tonnes.