Trailers for Many Uses 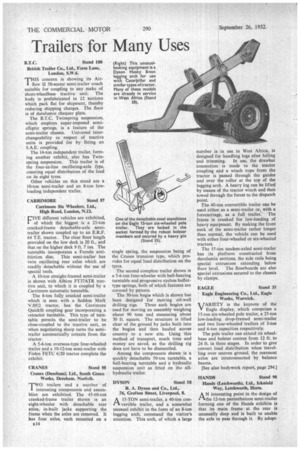 Page 152, 26th September 1952 — Trailers for Many Uses
Close
Noticed an error?
If you've noticed an error in this article please click here to report it so we can fix it.

197IS concern is showing its Air1.v, 50-seater semi-trailer coach

suitable for coupling to any make of short-wheelbase tractive unit. The body is prefabricated in 12 sections which pack flat for shipment, thereby reducing shipping charges. The floor is of duralumin chequer plate.

semi-trailer chassis. Universal interchangeability in respect of tractive units is provided for by fitting an S.A.E. coupling.

The 14-ton independent trailer, forming another exhibit, also has Twinspring suspension. This trailer is of the four-in-line oscillating-axle cype, ensuring equal distribution of the load on its eight tyres.

Other vehicles on this stand are a 10-ton semi-trailer and an 8-ton lowloading independent trailer.

FivE different vehicles are exhibited, of which the biggest is a 25-ton cranked-frame detachable-axle semitrailer shown coupled up to an E.R.F. 64 T.E. tractor. The clear floor length provided on the low deck is 20 ft., and that on the higher deck 9 ft. 7 ins. The turntable incorporates a Ferodo anti

friction disc. This semi-trailer has twin oscillating rear axles which are readily detachable without the use of special tools.

A 10-ton straight-framed semi-trailer is shown with Albion FT•37ATR tracfive unit, to which it is coupled by a Carrimore automatic turntable.

The 8-ton fully cranked semi-trailer which is seen with a Seddon Mark V.S9/2 tractor, has the Carrimore Quickfit coupling gear incorporating a retractor turntable. This type of turntable permits the semi-trailer to be close-coupled to the tractive unit, as when negotiating sharp turns the semitrailer automatically retracts from the tractor.

A 5-6-ton overseas-type four-wheeled trailer and a 10-12-ton semi-trailer with Foden FETU 6/20 tractor complete the exhibit.

ri0 trailers and a number of nteresting components and assemblies are exhibited. The 45-60-ton cranked-frame trailer shown is an eight-wheeler with detachable rear axles, in-built jacks supporting the frame when the axles are removed. It has four axles, each mounted on a

single spring, the suspension being of the Cranes trunnion type, which provides for equal load distribution on the tyres.

The second complete trailer shown is a 5-6-ton four-wheeler with ball-hearing turntable and progressive eyeless buffertype springs, both of which features are covered by patents.

The 30-ton bogie which is shown has been designed for moving oil-well drilling rigs. Three such bogies are used for moving an assembly weighing ab.out 90 tons and measuring about 30 ft. square. The structure is lifted clear of the ground by jacks built into the bogies and then hauled across country to a new site. Using this method of transport, much time and money are saved, as the drilling rig does not have to be dismantled.

Among the components shown is a quickly detachable 50-ton turntable, a ball-bearing turntable and a hydraulic suspension unit as fitted on the allhydraulic trailer.

A 15-TON semi-trailer, a 40-ton convertible trailer, and a somewhat unusual exhibit in the form of an 8-ton logging arch, command the visitor's attention. This arch, of which a large number is in use in West Africa, is designed for handling logs after felling and trimming. In use, the drawbar Connection is made to the tractor coupling and a winch rope from the tractor is passed through the guides and over the roller at the top of the logging arch. A heavy log can be lifted by means of the tractor winch and then towed through the forest to the dispatch point.

The 40-ton convertible trailer can be used either as a semi-trailer or, with a forecarriage, as a full trailer: The frame is cranked for low-loading of heavy equipment. By making the front neck of the semi-trailer rather longer than normal, the vehicle can be used with either four-wheeled or six-wheeled tractors.

The 15-ton tandem-axled semi-trailer has its platform constructed from duralumin sections, the side rails being special extrusions extending below floor level. The floorboards are also special extrusions secured to the chassis by clamps.

VARIETY is the keynote of the V Eagle display, which comprises a 15-ton six-wheeled pole trailer, a 25-ton low-loading drop-framed semi-trailer and two four-wheeled trailers of 3-ton and 6-ton capacities respectively.

The pole trailer can extend its wheelbase and bolster centres from 12 ft. to 24 ft. in three stages. In order to give correct load distribution when travelling over uneven ground, the rearmost axles are interconnected by balance beams.

AN interesting point in the design of the 12-ton pantechnicon semi-trailer forming one of the Hands exhibits is that its main frame at the rear is unusually deep and is built to enable the axle to pass through it. By adopt