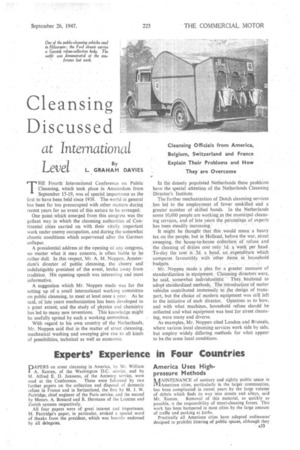 Page 51, 26th September 1947 — Cleansing Discussed
Close
Noticed an error?
If you've noticed an error in this article please click here to report it so we can fix it.
Keywords :

LeVel L .GRAHAM DAVIES T• HE Fourth International Conference on Public Cleansing, which took place in Amsterdam from September 15-19, was of special importance as the first to have been held since 1938. The world in general has been far too preoccupied with other matters during recent years for an event of this nature to be arranged.,

One pointrwhich emerged from this congress was the gallant way in which the cleansing authorities of Continental cities carried on with their vitally important work under enemy occupation, and during the somewhat chaotic conditions which supervened after the German collapse.

A presidential address at the opening of any congress, no matter what it may concern, is often liable to be rather dull In this respect, Mr. A. M. Noppen. Amsterdam's director of public cleansing, the cheery and indefatigable president of the event, broke away .froth tradition. His opening speech was interesting and most informative.

A suggestion which Mr. Noppen made was for the setting up of a small international working committee on public cleansing, to meet at least once a year. As he said, of late years mechanization has been developed to a great extent, and the study of physics and chemistry has led to many new inventions. This knowledge might be usefully spread by such a working committee. • With regard to his own country of the Netherlands, Mr. Noppen said that in the matter of street cleansing, mechanical washing and sweeping give rise to all kinds of possibilities, technical as well as economic. In the densely populated Netherlands these problems have the special attention of the Netherlands Cleansing Director's Institute.

The further mechanization of Dutch cleansing services has led to the employment of fewer unskilled and a greaternumber of skilled hands. In the Netherlands some 10,000 people are working in the municipal cleansing.services, and of late years the percentage. of experts

It might be thought that this .would mean a heavy tax on the people, but in Holland, before the war, street sweeping, the house-to-house collection of -refuse and the cleaning of drains cost only 1ld aweek 'Per _head. To day the 'cost is 2d a head, 'an expenditure Which compares favourably with "Other' items_ in :household Mr.' Noppen. made .a plea for . a greater measure of standardization in equipment. Cleansing directors were, he said, somewhat individualiS,tic The hesitated to adopt standardized methods The introduction'of motor vehicles contributed immensely, to the design of tranSport, but the choice of modern equipment was still left to the initiative of each director. Opinions as to 'how, and with what machines, household refuse should be collected and what equipment was best for street cleansing, were many and diverse.

• As examples, Mr. Noppen cited London and Brussels, where various local cleansing services work side by side, but employ widely differing methods for what appear to be.the same local:conditions.