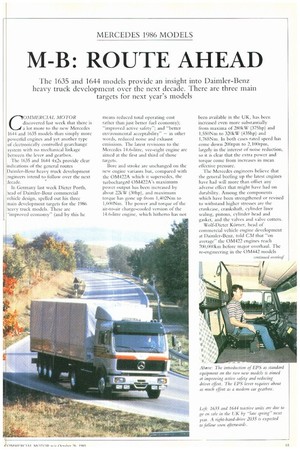 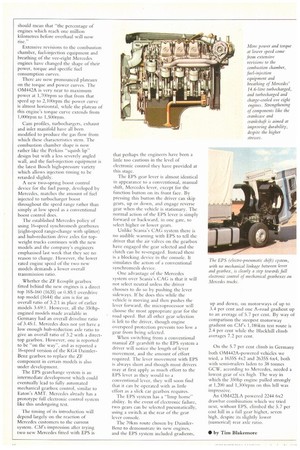 The 1635 and 1644 models provide an insight into Daimler-Benz heavy truck development over the next decade. There are three main targets for next year's models

COMMER CIA L MOTOR discovered last week that there is a lot more to the new Mercedes 1644 and 1635 models than simply more powerful engines and yet another type of electronically controlled gearehange system with no mechanical linkage between the lever and gearbox.

The 1635 and 1644 4x2s provide dear indications of the general routes . Daimler-Benz heavy truck development ,7.ngineers intend to follow over the next decade.

In Germany last week Dieter Porth, head of Daimler-Benz commercial vehicle design, spelled out his three main development targets for the 1986 heavy truck models. These are "improved economy" (and by this he means reduced total operating cost rather than just better fuel economy); "improved active safety"; and "better environmental acceptability" — in other words, reduced noise and exhaust emissions. The latest revisions to the Mercedes 14.6-litre, yee-eight engine are aimed at the first and third of those targets.

Bore and stroke are unchanged on the new engine variants but, compared with the 0M422A which it supersedes, the turbocharged 0M422A's maximum power Output has been increased by about 22kW (31)hp), and maximum torque has gone up from 1,402Nni to 1,600Nrn. The power and torque of the air-to-air charge-cooled version of the 14.6-litre engine, which hitherto has not

been available in the UK, has been increased even more substantially from maxima of 280k W (375hp) and 1,550Nm to 320kW (435hp) and 1,765Nm. In both cases rated speed has come down 200rpm to 2,10Orpm, largely in the interest of noise reduction, so it is clear that the extra power and torque come from increases in mean effective pressure.

The Mercedes engineers believe that the general beefing up the latest engines have had will more than offset any adverse effect that might have had on durability. Among the components which have been strengthened or revised to withstand higher stresses are the crankcase, crankshaft, cylinder liner sealing, pistons, cylinder head and gasket, and the valves and valve cotters.

Wolf-Dieter Korner, head of commercial vehicle engine development at Daimler-Benz, told CM that "on average" the 0M422 engines reach 700,000km before major overhaul. The re-engineering in the 0M4(4.2aireddeoilLeaf

should mean that "the percentage of engines which reach one million kilometres before overhaul will now rise."

Extensive revisions to the combustion chamber, fuel-injection equipment and breathing of the vee-eight Mercedes engines have changed the shape of their power, torque and specific fuel consumption curves.

There are now pronounced plateaux on the torque and power curves. The 0M442A is very near to maximum power at 1,70Orpin so that from that speed up to 2,10Orpm the power curve is almost horizontal, while the plateau of this engine's torque curve extends from 1,000rnm to 1,500rtnn.

Cam profiles, turbochargers, exhaust and inlet manifold have all been modified to produce the gas flow from which these characteristics stem. The combustion chamber shape is now rather like the Perkins "squish lip" design but with a less severely angled wall, and the fuel-injection equipment is the latest Bosch high-pressure variety which allows injection timing to be retarded slightly.

A new two-spring boost control device for the fuel pump, developed by Mercedes, matches the amount of fuel injected to turbocharger boost throughout the speed range rather than simply at low speed as a conventional boost control does.

The established Mercedes policy of using 16-speed synchromesh gearboxes (eight-speed range-change with splitter) and hub-reduction drive axles for topweight trucks continues with the new models and the company's engineers emphasised last week that they see no reason to change. However, the lower rated engine speed of the two new models demands a lower overall transmission ratio.

Whether the ZF Ecosplit gearbox fitted behind the new engines is a direct top 16S-160 (1635) or 0.85:1 overdrive top model (1644) the aim is for an overall ratio of 3.2:1 in place of earlier models 3.69:1. However, all the 350hpengined models made available in Germany had an overall driveline ratio of 3.45:1. Mercedes does not yet have a low enough hub-reduction axle ratio to give an overall ratio of 3.2 with a directtop gearbox. However, one is reported to be "on the way", and as reported a 16-speed version of the KG4 DaimlerBenz gearbox to replace the ZF component in certain models is also under development.

The EPS gearchange system is an intermediate development which could eventually lead to fully automated mechanical gearbox control, similar to Eaton's AMT. Mercedes already has a prototype full electronic control system like this undergoing test.

The timing of its introduction will depend largely on the reaction of Mercedes customers to the current system. CM's impression after trying two new Mercedes fitted with EPS is that perhaps the engineers have been a little too cautious in the level of electronic control they have provided at this stage.

The EPS gear lever is almost identical in appearance to a conventional, manual shift. Mercedes lever, except for the function button on its front face. By pressing this button the driver can skip gears, up or down, and engage reverse gear when the vehicle is stationary. The normal action of the EPS lever is simply forward or backward, in one gate, to select higher or lower gears.

Unlike Scania's CAG system there is no audible warning with EPS to tell the driver that the air valves on the gearbox have engaged the gear selected and the clutch can be re-engaged. Instead there is a blocking device in the console. It simulates the action of a conventional synchromesh device.

One advantage of the Mercedes system over Scania's CAG is that it will not select neutral unless the driver chooses to do so by pushing the lever sideways. If he does this while the vehicle is moving and then pushes the lever forward, the microprocessor will choose the most appropriate gear for the road speed. But all other gear selection is left to the driver, though engine overspeed protection prevents too low a gear from being selected.

When switching from a conventional manual ZF gearshift to the EPS system a driver will notice the length of lever movement, and the amount of effort required. The lever movement with EPS is always short and though most drivers may at first apply as much effort to the EPS lever as they would to a conventional lever, they will soon find that it can be operated with as little effort as a slick car gearbox requires.

The EPS system has a "limp home" ability. In the event of electronic failure, two gears can be selected pneumatically, using a switch at the rear of the gear lever console.

The 70km route chosen by DaimlerBenz to demonstrate its new engines, and the EPS system included gradients, up and down, on motorways of up to 3.4 per cent and one A-road gradient up to an average of 5.7 per cent. By way of comparison the steepest motorway gradient on CM's 1,186km test route is 2.4 per cent while the Blackhill climb averages 7.2 per cent.

An 0M422LA powered 2244 6x2 drawbar combination which we tried next, without EPS, climbed the 5.7 per cent hill in a full gear higher, seven high, despite its slightly lower (numerical) rear axle ratio.