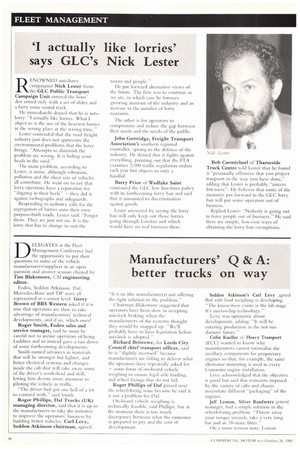 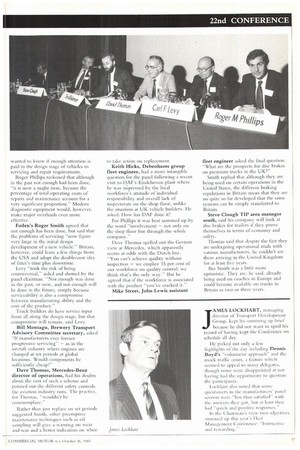 the opportunity to put their questions to some of the vehicle manufacturers/suppliers in an open question and answer session chaired by Tim Blakemore, CM engineering editor.

Foden, Seddon Atkinson, Dal, Mercedes-Benz and TIP were all represented at a senior level. Gerry Brown of BRS Western asked if it is true that operators are slow to take advantage of manufacturers' technical developments, and if so, which ones?

Roger Smith, Foden sales and service manager, said he must be careful not to accuse operators of being Luddites and so instead gave a run down of some forthcoming developments.

Smith named advances in materials that will be stronger but lighter, and better electrical systems and changes inside the cab that will take away some of the driver's work-load and skill, letting him devote more attention to piloting the vehicle in traffic.

"The driver had got one hell of a lot to contend with," said Smith.

Roger Phillips, Daf Trucks (UK) managing director, said that it is up to the manufacturers to take the initiative to improve the operators' business by building better vehicles. Carl Levy, Seddon Atkinson chairman, agreed.

"It is us (the manufacturers) not offering the right solution to the problem."

Chairman Blakemore suggested that Operators have been slow in accepting anti-lock braking when the manufacturers of the systems thought they would be snapped up. "We'll probably have to have legislation before anti-lock is adopted."

Richard Bristowe, for Leeds City Council chief transport officer, said he is "slightly incensed" because manufacturers are failing to deliver what the operators have repeatedly asked for — some form of on-hoard vehicle weighing to ensure legal axle loading, and wheel fixings that do not fail.

Roger Phillips of Daf passed over the wheel-fixing issue because he said it is not a problem for Dal.

On-board vehicle weighing is technically feasible, said Phillips, but at the moment there is too much discrepancy between what the customer is prepared to pay and the cost of development.

Levy was optimistic about development, adding: "It will be entering production in the not too distanct future."

Colin Kueller of Heavy Transport (ECC) wanted to know why manufacturers cannot rationalise the ancillary components for proprietary engines so that, for example, the same alternator mounting is used in every Cummins engine installation.

Levy acknowledged that the objective is good but said that restraints imposed by the variety of cabs and chassis necessitate different ."packaging" of the engines.

Jeff Lemon, Silver Roadways general manager, had a simple solution to the wheel-fixing problem. "Throw away your torque wrench, take a very long bar and an 18-stone fitter."

On :I more serious note, Lemon

wanted to know if enough attention is paid in the design stage of vehicles to servicing and repair requirements.

Roger Phillips reckoned that although in the past not enough had been done, "it is now a majbr item, because the percentage of total operating costs of repairs and maintenance account for a very significant proportion." Modern diagnostic equipment would, however, make major overhauls even more effective.

Foden's Roger Smith agreed that not enough has been done, but said that the problems of servicing "now figure very large in the initial design development of a new vehicle." Britain, however, could learn a few things from the USA and adopt the double-cost idea of fitter's time plus downtime.

Levy "took the risk of being controversial," aided and abetted by the panel chairman. "Not enough was done in the past, or now, and not enough will be done in the future, simply because serviceability is also a compromise between manufacturing ability and the cost of the product."

Truck builders do have service input from all along the design stage, but that compromise will remain, said Levy.

Bill Montagu, Brewery Transport Advisory Committee secretary, asked "If manufacturers ever foresee progressive servicing" — as in the aircraft industry where engines are changed at set periods at global locations. Would components be sufficiently cheap?"

Dave Thomas, Mercedes-Benz director of operations, had his doubts about the cost of such a scheme and pointed out the different safety controls the aviation industry runs. The practice, for Thomas, "1.youldn't be commonplace."

Rather than just replace on set periods suggested Smith, other preemptive maintenance techniques such as oil sampling will give a warning on wear and tear and a better indication on when to take action on replacement.

Keith Hicks, Debenhams group fleet engineer, had a more intangible question for the panel following a recent visit to DAF's Eindehoven plant where he was impressed by the local workforce's attitude of individual responsibility and overall lack of inspectorate on the shop floor, unlike the situation at UK vehicle builders. He asked: How has DAF done it?

For Phillips it was best summed up by the word "involvement — not only on the shop floor but through the whole company."

Dave Thomas spelled out the German view at Mercedes, which apparently seems at odds with the Dutch line. "You can't achieve quality without inspection — we employ 15 per cent of our workforce on quality control; we think that's the only way." But he agreed that if the workforce is associated with the product "you've cracked it."

fleet engineer asked the final question. "What are the prospects for disc brakes on premium trucks in the UK?"

-Smith replied that although they are being used on certain operations in the United States, the different braking regulations in Britain mean that they are no quite so far developed that the same systems can be simply transferred to Britain.

Steve Cough TIP area manager south, said his company will look at disc brakes for trailers if they prove themselves in terms of economy and safety.

Thomas said that despite the fact they are undergoing operational trials with various manufacturers, he couldn't see them arriving in the United Kingdom for at least five years.

But Smith was a little more optimistic. They are, he said, already being used on coaches in Europe and could become available on trucks in Britain in two or three years.