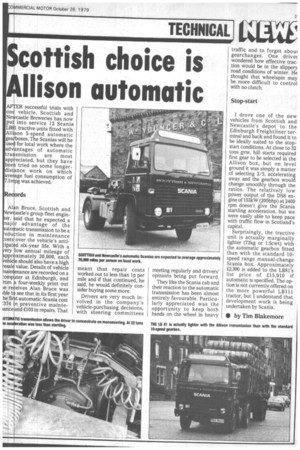 AF ER successful trials with on vehicle, Scottish and Ne castle Breweries has now pu into service 12 Scania L 1 tractive units fitted with All son 5-speed automatic gea boxes. The Scanias will be use for local work where the ad ntages of automatic tra i smission are most app eciated, but they have bee tried on some longerdist nce work on which ave age fuel consumption of 7.1 pg was achieved.

Al :n Bruce, Scottish and New stle's group fleet enginer, aid that he expected a naj r advantage of the auto atic transmission to be a edu tion in maintenance osts over the vehicle's antiipat d six-year life. With a very low annual mileage of appr ximately 20,000, each vehi e should also have a high -esal value. Details of vehicle main nance are recorded on a '.-.omp ter at Edinburgh, and 'ram four-weekly print out le re eives Alan Bruce was Lble ti see that in its first year he fi t automatic Scania cost 374 n preventive maintelance and E103 in repairs. That meant that repair costs worked out to less than lp per mile and if that continued, he said, he would definitely consider buying some more.

Drivers are very much involved in the company's vehicle-purchasing decisions, with steering committees meeting regularly and drivers' opinions being put forward.

They like the Scania cab and their reaction to the automatic transmission has been almost entirely favourable. Particularly appreciated was the opportunity to keep both hands on the wheel in heavy traffic and to forget aboui gearchanges. One drivei wondered how effective traction would be in the slippery road conditions of winter. He thought that wheelspin may be more difficult to control with no clutch.

I drove one of the new vehicles from Scottish and Newcastle's depot to the Edinburgh Freightliner terminal and back and found it to be ideally suited to the stopstart conditions. At close to 32 tons gvw, hill starts required first gear to be selected in the Allison box, but on level ground it was simply a matter of selecting 2/5, accelerating away and the gearbox would change smoothly through the ratios. The relatively low power output of the DS8 engine of 153kW (205bhp) at 2400 rpm doesn't give the Scania startling acCeleration, but we were easily able to keep pace with traffic flow in Scotland's capital.

Surprisingly, the tractive unit is actually marginally lighter (72kg or 1.5cwt) with the automatic gearbox fitted than with the standard 10speed range manual-change Scania box. Approximately £2,300 is added to the L1381's list price of £15,910 if automatic is specified. The option is not currently offered on the more powerful LB111 tractor, but I understand that development work is being undertaken by Scania.