cond chance after ppml over centre 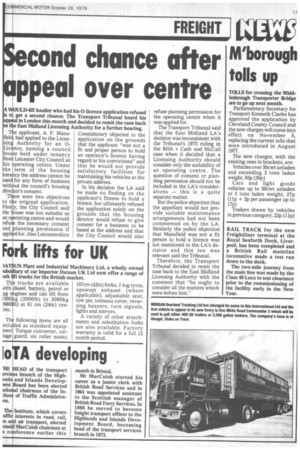 Page 19, 26th October 1979 — cond chance after ppml over centre
Close
Noticed an error?
If you've noticed an error in this article please click here to report it so we can fix it.
Keywords : Town And Country Planning In The United Kingdom, Planning Permission, Zoning, Drinking Culture, Law / Crime

ULD-BE haulier who had his 0-licence application refused get a second chance. The Transport Tribunal heard his in London this month and decided to remit the case back e East Midland Licensing Authority for a further hearing.

e applicant, A. F. Mansfiel had applied to the Licensin Authority for an OLic nce, naming a council hou e held under tenancy fro Leicester City Council as his perating centre. Under he term of the housing ena cy the address cannot be se for any form of business with ut the council's housing dire or's consent.

re were two objections to t e original application. First y, the City Council said the ouse was not suitable as an o rating centre and would refu the necessary consent and lanning permission if appli for. Also Leicestershire Constabulary objected to the application on the grounds that the applicant "was not a fit and proper person to hold an operator's licence having regard to his convictions" and that he would not provide satisfactory facilities for maintaining his vehicles at the private address.

In his decision the LA said he made no finding on the applicant's fitness to hold a licence, but ultimately refused the application solely on the grounds that the housing director would refuse to give consent for a business to be based at the address and that the City Council would also refuse planning permission for the operating centre when it was applied for. The Transport Tribunal said that the East Midland LA's decision was inconsistent with the Tribunal's 1975 ruling in the RI-IA v Cash and McCall case when it decided that a Licensing Authority should consider only the suitability of an operating centre. The question of consent or planning permission should not be included in the LA's considerations — this is a quite separate matter. But the police objection that the appellant would not provide suitable maintenance arrangements had not been commented on by the LA. Similarly the police objection that Mansfield was not a fit person to hold a licence was not mentioned in the LA's decision and this too was relevant said the Tribunal.

Therefore, the Transport Tribunal decided to remit the case back to the East Midland Licensing Authority with the comment that "he ought to consider all the matters which were before him."