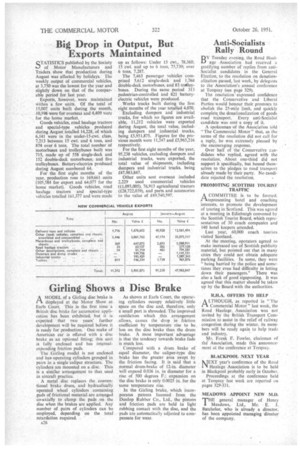 Page 28, 26th October 1951 — Girling Shows a Disc Brake
Close
Noticed an error?
If you've noticed an error in this article please click here to report it so we can fix it.

AMODEL of a Girling disc brake is displayed at the Motor Show at Earls Court. This is the first time a British disc brake for automotive application has been exhibited, but it is expected that two years' further development will be required before it is ready for production. One make of American car is offered with a disc brake as an optional fitting:this unit is fully enclosed and has internalexpanding friction pads.

The Girling model is not enclosed and has-operating cylinders grouped in pairs in a single 'caliper structure. The -cylinders are Mounted on a disc. This is a similar arrangement to that used in aircraft practice.

A metal disc replaces the conventional brake drum, and hydraulically operated wheel cylinders containing pads of frictional material are arranged co-axially to clamp the pads on the disc when the brakes are applied. Any number of pairs of 'cylinders can be employed, depending. on the . total' retardation required.

s26 As shown at Earls Court, the operating cylinders occupy relatively little space on the disc and, therefore, only a small part is shrouded. The improved ventilation which this arrangement allows, causes the drop in friction coefficient by temperature rise to be less on the disc brake than the drum brake. A most important advantage is that the tendency towards brake fade is much less.

Compared with a drum brake of equal diameter, the caliper-type disc brake has the greater area swept by the friction facing. It is said that a normal drum-brake of 12-in. diameter will expand 0.036 in. in diameter for a rise of 500 degrees F.; expansion on the disc brake is only 0.0025 in. for the same temperature rise.

In the Girling brake, which incorporates patents licensed from the Dunlop Rubber Co., Ltd., the pistons and friction pads are held in light rubbing contact with the disc, and the pads are automatically adjusted to compensate for wear.