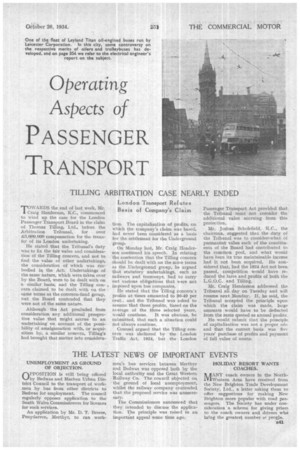 Page 55, 26th October 1934 — Operating Aspects of
Close
Noticed an error?
If you've noticed an error in this article please click here to report it so we can fix it.
Keywords : Thomas Tilling, Tilling, London Passenger Transport Board, Arbitration, Arbitral Tribunal, Tillage, Law / Crime

London Transport Refutes Basis of Company's Claim T''ARDS the end of last week, Mr. Craig Henderson, K.C., 'commenced to wind up the case for the London Passenger Transport Board in the claim of Thomas Tilling, Ltd., before the Arbitration Tribunal, for over

3,4:100,000 compensation for the transfer of its London undertaking.

He stated that the Tribunals duty was to fue the fair value and consideration of the Tilling concern, and not to find the value of other undertakings, the consideration of which was embodied in the Act. Undertakings of the same nature, which were taken over by the Board, were to be dealt with on a similar basis, and the Tilling concern claimed to be dealt with on the same terms as the common-fund group, hut the Board contended that they were not of the same nature.

Although the Act precluded from consideration any additional prospective value that might accrue to an undertaking on account of the possibility of amalgamation with, or acquisition by, a similar concern, Tilling's had brought that matter into considera tans. The capitalization of profits, on which the company's claim was based, had never been considered as a basis for the settlement for the Underground group.

On Monday last, Mr. Craig Henderson continued his speech. In refuting the contention that the Tilling concern should be dealt with on the same terms as the Underground group, he argued that statutory undertakings, such as railways and tramways, had to carry out various obligations that were not imposed upon bus companies.• He stated that the Tilling concern's profits at times amounted to 30-40 per cent., and the Tribunal was asked to assume that those profits, based on the average of the three selected years, would continue. It was obvious, lie submitted, that such a situation could not always continue.

Counsel argued that the Tilling concern was sheltered by the London Traffic Act, 1924, but the London Passenger Transport Act provided that the Tribunal must not consider the additional value accruing from this protection.

Mr, Joshua Scholefield, K.C., the chairman, suggested that the duty of the Tribunal was to consider-what of permanent value each of the constituents of the Board had contributed to the common pool, and what would have been its true maintainable income had it not been acquired. He considered that, had the 1924 Act not been passed, competition would have reduced the fares and profits of both the L.G.O.C. and Tilling.

Mr. Craig Henderson addressed the Tribunal all day on Tuesday and will resume next Monday. If, he said, the Tribunal accepted the principle upon which the claim was made, large amounts would have to be deducted from the sums quoted as annual profits.

He would submit that the principle of capitalization was not a proper one and that the correct basis was five years' purchase of profits and payment of lull value of assets.