Haulier given time to move 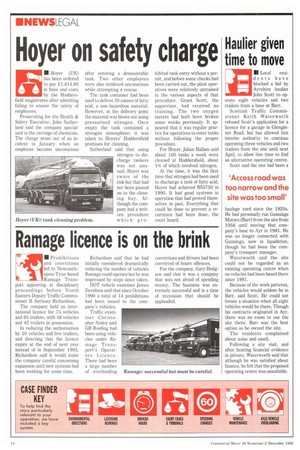 Page 16, 26th November 1992 — Haulier given time to move
Close
Noticed an error?
If you've noticed an error in this article please click here to report it so we can fix it.
Keywords : Ayr, South Ayrshire, Haulage, Business / Finance

• Local residents have blocked a bid by Ayrshire haulier John Scott to operate eight vehicles and two trailers from a base at Barr.

Scottish Traffic Commissioner Keith Waterworth refused Scott's application for a licence for a garage in Glenginnet Road, but has allowed him interim authority to continue operating three vehicles and two trailers from the site until next April, to allow him time to find an alternative operating centre.

Scott said the site had been a haulage yard since the 1920s. He had personally run Gunnings Motors (Barr) from the site from 1958 until moving that company's base to Ayr in 1981. He was no longer connected with Gunnings, now in liquidation, though he had been the company's transport manager.

Waterworth said the site could not be regarded as an existing operating centre when no vehicles had been based there since 1981.

Because of the work patterns, the vehicles would seldom be in Barr, said Scott. He could not forsee a situation when all eight vehicles would be there. Though his contracts originated in Ayr, there was no room to use the site there. Barr was the best option as he owned the site.

The residents complained about noise and smell.

Following a site visit, and after hearing financial evidence in private, Waterworth said that although he was satisfied about finance, he felt that the proposed operating centre was unsuitable.