EFFORTS BY Mr Stephen Ross (Liberal, Isle of Wight) to 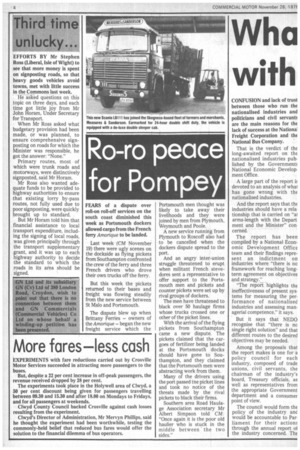 Page 6, 26th November 1976 — EFFORTS BY Mr Stephen Ross (Liberal, Isle of Wight) to
Close
Noticed an error?
If you've noticed an error in this article please click here to report it so we can fix it.
Keywords : Types Of Roads, Trunk Road, Traffic Sign, Motorway, Horam, Highway

see that more money is spent on signposting roads, so that heavy goods vehicles avoid towns, met with little success in the Commons last week.

He asYed questions on this topic on three days, and each time got little joy from Mr John Horarn, Under Secretary for Transport.

When Mr Ross asked what budgetary provision had been made, or was planned, to ensure comprehensive signposting on roads for which the Minister was responsible, he got the answer: "None."

Primary routes, most of which were trunk roads and motorways, were distinctively signposted, said Mr Horam.

Mr Ross also wanted adequate funds to be provided to highway authorities to ensure that existing lorry by-pass routes, not fully used due to poor signposting, were quickly brought up to standard.

But Mr Horam told him that financial assistance to local transport expenditure, including the signing of local roads, was given principally through the transport supplementary grant, and it was up to each highway authority to decide the standard to which the roads in its area should be signed.