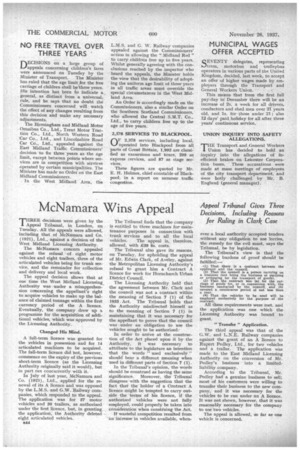 Page 28, 26th November 1937 — McNamara Wins Appeal
Close
Noticed an error?
If you've noticed an error in this article please click here to report it so we can fix it.
Keywords : Drinking Culture, Business / Finance, Law / Crime

'THREE decisions were given by the I Appeal Tribunal, in London, on Tuesday. All the appeals were allowed, including that of McNamara and Co. (1921), Ltd., against a decision of the %Vest Midland Licensing Authority.

The McNamara concern appealed against the refusal of eight motor vehicles and eight trailers, three of the articulated vehicles being for trunk service, and the remainder for collection and delivery and local work.

The appeal decision shows that at one time the West Midland Licensing Authority was under a misapprehension concerning the appellant's right to acquire vehicles to make up the balance of claimed tonnage within the first currency period of the A licence. Eventually, the company drew up a programme for the acquisition of additional vehicles, which was approved by the Licensing Authority.

A 'full-term licence was granted for the vehicles in possession and for 14 articulated machines to be acquired. The full-term licence did not, however, commence on the expiry of the previous short-term licence (as the Licensing Authority originally said it would), but in part ran concurrently with it.

In July of last year, McNamara and Co. (1921), Ltd., applied for the renewal of its A licence and was opposed by the L.M.S. and G.W. Railway companies, which responded to the appeal. The application was for 37 motor vehicles and 30 trailers, as authorized under the first licence, but, in granting the application, the Authority deleted eight articulated vehicles.

544 The Tribunal finds that the company is entitled to three machines for maintenance purposes in connection with trunk services and to all the local vehicles. The appeal is, therefore, allowed, with £38 8s. costs.

The Tribunal also gave its reasons, on Tuesday, for upholding the appeal of Mr. Edwin Clark, of Aveley, against the Metropolitan Licensing Authority's refusal to grant him a Contract A licence for work for Hornch-urch Urban District Council.

The Licensing Authority held that the agreement between Mr. Clark and the council was not a contract within the meaning of Section 7 (1) of the 1933 . Act. The Tribunal holds that the Authority misdirected himself as to the meaning of Section 7 (1) in maintaining that it was necessary for the appellant to prove that the council was under an obligation to use the vehicles sought to be authorized:

In order to arrive at the construction of the Act placed upon it by the Authority, it was necessary to attribute to the legislature an intention that the words "used exclusively' should. bear a different meaning when

In the Tribunal's opinion, the words -should he construed as having the same significance. Moreover, the Tribunal disagrees with the suggestion that the fact that the holder of a Contract A licence might be tempted to carry outside the terms of his licence, if the authorized vehicles were not fully employed, could properly be taken into consideration when construing the Act.

If wasteful competition resulted from an increase in vehicles available, when

ever a local authority accepted tenders without any obligation to use lorries, the remedy for the evil mist, says the -Tribunal, be by legislation.

The Tribunal's view is that the following burdens of proof should be fulfilled:—

a) That there is a contract between the applicant and the council..

'2) That the council is a person carrying on a business (net being the business of carrying or arranging for the transport of goods).

i3) That the contract was • (a) for the carriage of goods for, Or in connection with, the business' conducted by the council, and Ibl covered a. continuous period of not less than a year.

(4) That the vehicles to be -used will be employed exclusively for the purpose of the contract.

All these requirements were met, and the application was one which the Licensing Authority was hound to grant.

The third appeal was that of the G.W. and L.N.E. Railway companies against the grant of an A licence to Rupert Pedley, Ltd., for two vehicles and a trailer. The application was made to the East Midland Licensing Authority on the conversion of Mr. Pedley's business into a limitedliability company.

According to the Tribunal, Mr. Pedley had a genuine business to sell; most of his customers were willing to transfer their business to the new company, and it was necessary for the vehicles to be run under an A licence. It was not shown, however, that it was reasonably necessary for the company to use two vehicles.

The appeal is allowed, so far as one vehicle is concerned-.