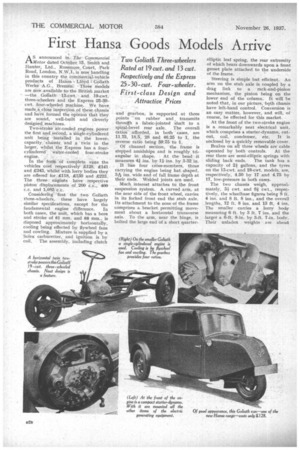 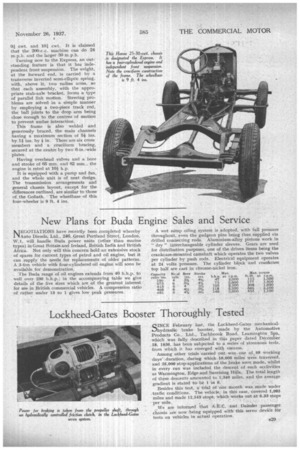 Page 12, 26th November 1937 — First Hansa Goods Models Arrive
Close
Noticed an error?
If you've noticed an error in this article please click here to report it so we can fix it.

AS announced in The Copmer &jai Motor dated October 15, Smith and Hunter, Ltd., Rossmore Court, Park Road, London, N.W,1, is now handling in this country the Cornthercial-vehicle Products of Hansa Lloyd Goliath Werke A.G., Bremen: Three models are now available to the British market —the Goliath 13-cwt. and 19-cwt. three-wheelers and the Express .25-30cwt. four-wheeled machine. We -have. made,a close inspection of these chassis and have formed the opinion that they are sound, well-built and cleverly designed, machines.

Two-stroke air-cooled engines power the first and second, a single-cylindered unit being -installed in the lowercapacity • chassis and a twin in the larger, whilst the Express has a fourcylinderecf water-cooled four-stroke engine.

Considering first the two Goliath three-wheelers, these have largely similar specifications, except for the fundamental engine difference. In both cases, the unit, which has a bore and stroke of 61 mm. and 68 mm., is disposed approximately horizontally, cooling being effected by flywheel fans and cowling. Mixture is supplied by a Soles carburetter, and ignition is by

coil. The assembly, including clutch and gearbox, is supported at three points on rubber and transmits through a fabric-jointed shaft to a spiral-bevel rear axle. The overall ratios afforded, in both cases, are 11.75, 18.5, 28 and 46.25 to 1, the reverse ratio being 59.75 to 1.

Of channel section, the frame is stepped amidships and is roughly tri angular in shape. At the bend it

It has four cross-members, those carrying the engine being hat shaped, 315.4 ins, wide and of full frame depth at their ends. Welded joints are used.

Much interest attaches to the front suspension system. A curved arm, at the near side of the front wheel, carries in its forked front end the stub axle. Its attachment to the nose of the frame comprises a bracket permitting movement about a horizontal transverse axis. To the arm, near the hinge, is bolted the large end of a short quarter elliptic leaf spring, the rear extremity of which bears downwards upon a front gusset plate attached to the underside of the frame.

Steering is simple but efficient. An arm on the stub axle is coupled by a drag link to a rack-and-pinion mechanism, the pinion being on the lower end of the column. It will be noted that, in our picture, 139th chassis have left-hand control. Conversion is an easy matter, however, and will, of course, be effected for this market.

At the front of the two-stroke engine is a remarkably neat electrical unit. which comprises a starter-dynamo, cutout, coil, condenser, etc. It is enclosed by a quickly removable cover.

Brakes on all three wheels are cable operated by both controls. At the rear there are semi-elliptic springs with sliding back ends. The tank has a capacity of 21 gallons, and the tyres on the 13-cwt. and 19-cwt. models, are, respectively, 4.50 by 17 and 4.75 by ,17, low-pressure in both cases.

Turning now to the Express, an outstanding feature is that it has independent front suspension. The weight, at the forward end, is carried by a transverse inverted semi-elliptic spring, with, above it, two radius arms, so that each assembly, with the appropriate stub-axle bracket, forms a type of parallel link motion. Steering problems are solved in a simple manner by employing a two-piece track rod, the ball joints to the drop arm being close enough to the centres of motion to prevent undue interaction.

This frame is also welded and generously braced, the main channels having a maximum section of 54 ins. by 11 ins, by in. There are six cross members and a cruciform bracing, secured at the centre by two 6-in.-wide plates.

It is equipped with a pump and fan, and the whole unit is of neat design. The transmission arrangements and general chassis layout, except for the differences outlined, are similar to those of the Goliath. The wheelbase of this four-wheeler is 9 ft. 4 ins.