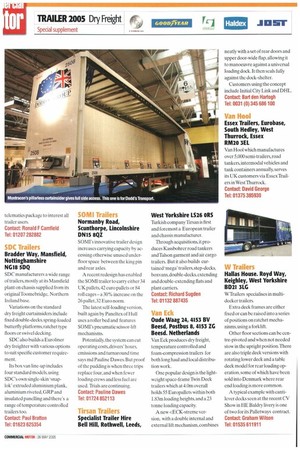 Page 84, 26th May 2005 — Trailer
Close
Noticed an error?
If you've noticed an error in this article please click here to report it so we can fix it.
Keywords : Trailer, Forklift Truck, Deck, Ratchet, Water, Construction, Technology

WTrailers specialises in multidecker trailers Extra deck frames are either fixed or can be raised into a series of positions on ratchet mechanisms, using a forklift.

Other floor sections can be centre-pivoted and when not needed stow in the upright position.There are also triple deck versions with rotating lower deck and a table deck model for rear loading operation, some of which have been sold into Denmark where rear end loading is more common.

A typical example with cantilever decks seen at the recent CV Show in RE Baldry livery is one of two for its Palletways contract. Contact: Graham Wilson