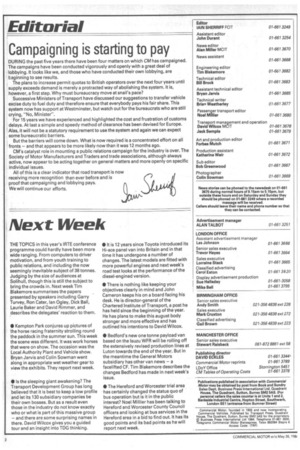 Page 4, 26th May 1984 — Next Week
Close
Noticed an error?
If you've noticed an error in this article please click here to report it so we can fix it.
Keywords : Hereford, Irte, Turvey, Bedford, Worcester

THE TOPICS in this year's IRTE conference programme could hardly have been more wide ranging. From computers to driver motivation, and from youth training to public relations, and including the now seemingly inevitable subject of 38 tonnes. Judging by the size of audiences at Solihull, though this is still the subject to bring the crowds in. Next week Tim Blakemore summarises the papers presented by speakers including Garry Turvey, Ron Cater, Ian Ogley, Dick Ball, Laurie Baker and David Rimmer, and describes the delegates' reaction to them.

• Kempton Park conjures up pictures of the horse racing fraternity strolling round the paddock in the summer sun. This week the scene was different. It was work horses that were on show. The occasion was the Local Authority Plant and Vehicle show. Bryan Jarvis and Colin Sowman went along in appropriate wet weather gear to view the exhibits. They report next week.

• Is the sleeping giant awakening? The Transport Development Group has long believed that it is best to keep a low profile and let its 130 subsidiary companies be their own bosses. But as a result even those in the industry do not know exactly who or what is part of this massive group — and there are some surprising names in there. David Wilcox gives you a guided tour and an insight into TDG thinking. • It is 12 years since Toyota introduced its Hi-ace panel van into Britain and in that time it has undergone a number of changes. The latest models are fitted with more powerful engines and next week's road test looks at the performance of the diesel-engined version.

• There is nothing like keeping your objectives clearly in mind and John Cameron keeps his on a board facing his desk. He is director-general of the Chartered Institute of Transport, a post he has held since the beginning of the year. He has plans to make this august body stronger and more effective and has outlined his intentions to David Wilcox.

• Bedford's new one tonne payload van based on the lsuzu WFR will be rolling off the extensively revised production lines at Luton towards the end of the year. But in the meantime the General Motors subsidiary has other van news — a facelifted CF. Tim Blakemore describes the changes Bedford has made in next week's issue.