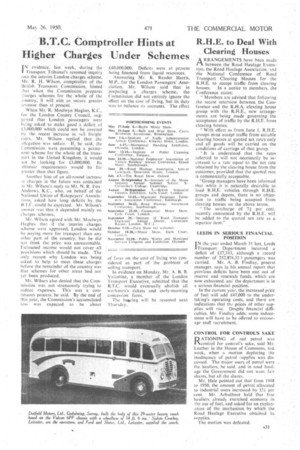 Page 33, 26th May 1950 — CONTROL FOR CONTROL'S SAKE
Close
Noticed an error?
If you've noticed an error in this article please click here to report it so we can fix it.
Keywords : Petroleum Products, Haulage, Gasoline, Politics, Business / Finance

RATIONING of red petrol was control for control's sake, said Mr. Leather in the House of Commons, last week, when a motion deploring the inadequacy of petrol rupplies was discussed. The major users of petrol were the hauliers, he said, and in road haul, age the Government did not want fair shares, but all the shares.

Mr. Hale pointed out that from 1948 to 1950, the amount of petrol allocated to industrial users increased by 12f per cent. Mr. Arbuthnot held that free hauliers already exercised economy in the use of fuel, and asked for an explanation of the mechanism by which the Road Haulage Executive obtained its supplies.

The motion was defeated.